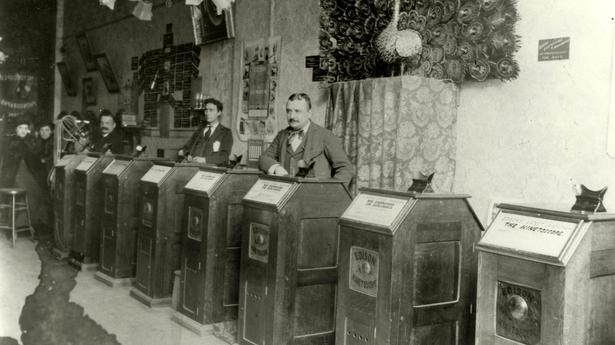 A first glimpse of cinema

With the holidays already upon us and the pandemic scene easing a bit, one of the activities most families tend to do on the weekends is to visit a theater to catch a new movie. Even though motion pictures are a multi-billion dollar industry worldwide today, they have only been around since the late 19th century.

By the end of that century, the concept of moving images as entertainment was gaining momentum. Magic lanterns had been around for generations and these devices used glass slides with images that were then projected. We looked at how pioneering photographer Eadweard Muybridge invented the zoopraxiscope in this column about two months ago. Muybridge’s zoopraxiscope projected a series of images, which were printed on a rotating glass disc, in successive phases of movement.


It is unclear when American inventor and businessman Thomas Alva Edison’s interest in film began. Although some say he had already been interested for years, it is evident that Muybridge’s visit to Edison’s laboratory in West Orange in February 1888 convinced him to invent a motion picture camera.

Muybridge suggested that they collaborate and work together to combine the zoopraxiscope with Edison’s phonograph – a device for recording and reproducing sound. While Edison was clearly intrigued by the idea, he decided not to join in, perhaps because he could see that the zoopraxiscope was not the best way to record movement.

Call it the kinetoscope


Ever an entrepreneur, Edison decided to protect his future inventions by filing a disclaimer with the Patent Office in October 1888. He described his ideas for a machine that would record and reproduce moving objects, calling it a device that ” would do for the eye. what the phonograph does for the ear”. He named this yet-to-be-invented device a kinetoscope, combining the Greek words for “movement” and “watching” – kineto and scopos.

Much of the credit for designing the kinetoscope actually goes to Edison’s assistant, William Kennedy Laurie Dickson, an accomplished photographer. Responsible for inventing Edison’s kinetoscope in June 1889, Dickson, assisted by Charles A. Brown, conducted numerous experiments to turn the concept into reality.

Celluloid film to the rescue


After initial attempts proved futile, Edison’s team changed direction to that of others in the field. Edison had met the French physiologist Etienne-Jules Marey, who had produced a sequence of images using a continuous roll of film in his chronophotography, in Europe and this set them on their new path.

Now the inventive process was retarded by the lack of rolls of film of the required length and durability. Edison’s experiments began using emulsion coated sheets of celluloid film which were developed by photography pioneer John Carbutt. When the Eastman Company began producing its own celluloid film, Dickson and his new assistant William Heise obtained it in large quantities and set to work on their machine.


Dickson had the prototype ready in 1891 and the device acted as both a camera and a peephole. On August 24, 1891, they applied for a patent for the kinetograph (the camera) and the kinetoscope (the viewer) and the device was completed in 1892.

Consisting of a four-foot-tall vertical wooden cabinet, the viewer had to look through a peephole at the top of the cabinet to view the film. The first public demonstration of Edison’s films featured three of his workers pretending to be blacksmiths and was held at the Brooklyn Institute of Arts and Sciences on May 9, 1893. In 1894, hundreds of people often lined up in the salons housing these devices to pay 25 cents (over $7 in today’s money) and watch five reels.

In the years that followed, Dickson left Edison to become part of the group that formed the American Mutoscope and Biograph Company; Edison sued this company in 1898 for infringing on its patent for the kinetograph; and the two companies began working together from 1909 until Edison’s company left the motion picture industry in 1918. By then Dickson, Edison and the Kinetoscope had more than a glimpse of a new form of media – motion pictures.

Here are 10 jobs you can apply for in Ayrshire, including nightclub photographer