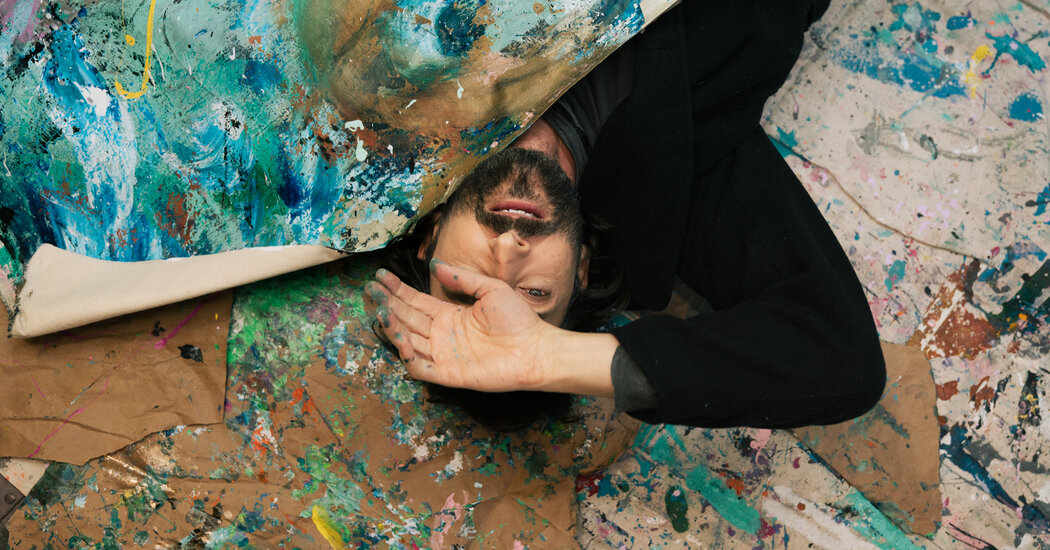 The aqua slapped the canvas first. Then white, cobalt and cotton candy pink. The yellow let go with a rude noise, followed by the red and the black. It was a freezing morning in a borrowed art studio in the Sunset Park section of Brooklyn. In a crumbly brick building along the industrial waterfront, actor Adrien Brody knelt on a drop cloth, smearing and swirling paint with a plastic card until it formed patterns , layers and streaks.

“Painting, I would say, was my first love,” he said.

Mr Brody, 48, who won an Oscar nearly two decades ago for “The Pianist”, recently returned to painting, after showing his work, somewhat reluctantly, he said, at Art Basel Miami Beach and at an art fair in New York. The child of artistic parents — his mother, Sylvia Plachy, is a photographer, and his father, Elliot Brody, a painter — he grew up drawing and painting.

As a teenager, he had applied to the visual arts program at Fiorello H. LaGuardia High School of Music & Art and Performing Arts. The arts program rejected her portfolio, but the drama department accepted it. Aside from the occasional graffiti, he gave up painting.

After a year at Stony Brook University and a semester at Queens College, he began acting seriously, attracting interest from Hollywood and art house directors such as Terence Malick, Spike Lee, Barry Levinson, Ken Loach and Roman Polanski. While still in his twenties, he gained a reputation as an actor of fierce commitment and relentless preparation, modifying his body when necessary, doing his own stunts when legal, eating a worm if a scene l demanded.

“I’m not looking to do hard things,” he said. “That’s not really what I’m looking to do. But things are difficult. And things that make sense tend to be difficult. I don’t know the easy way.

Eight or nine years ago, when rewarding roles were slimmer, he found himself with a paintbrush in his hand. After a year of renovations to his castle in upstate New York near Syracuse, he invited his friend the painter Georges Moquay to create an original work for a central wall. Mr. Moquay suggested that Mr. Brody comb alongside him.

Mr. Brody painted a dragon. Mr. Moquay was impressed and asked why he was not painting. Mr. Brody didn’t have a good answer. So he starts again, drawing inspiration from the graffiti of his New York youth.

Since then, each time he shoots on location, he carves out an artist’s studio in his temporary excavations. “I’m obligated to keep producing,” he said.

That morning in Brooklyn, he had woken up early at his home in Westchester County. With the help of his girlfriend, Georgina Chapman, the creator of Marchesa, he had packed his materials – canvases, acrylics, pastel sticks, spray paints, brushes – and brought them to a studio borrowed from Bill Hickey, a Street artist.

“It’s kind of a recreation of what I strewn all about,” he said, arranging his tubes of paint.

Once he started working, the chatter stopped. He produced a 3ft by 4ft canvas with a skull he had sketched in charcoal the previous night, and smeared paint around its edges, blotting it with pieces of brown paper and distressing it. with a brush.

From a mini-fridge, he grabbed a bottle of water. He uncapped it and took a sip, before pouring a steady stream onto the canvas, shaking it to make the paint flow. He spray painted cobweb and maze stencils, followed by gold drops, then poured water over them as well.

Mr. Brody worked quickly and intuitively, stooping, squatting, kneeling, and narrowing his sad eyes. “I don’t know what I’m going to do,” he said. “I just like doing it.”

The paint stained his fingers, his shoes, his camouflage pants. A shoelace has come loose. Several times he said he was done, but after pausing for a few seconds he would come back to the canvas, smearing, smearing and spilling again. He didn’t know the easy way.

“I’ll let it dry, then I’ll come back,” he said. But he couldn’t leave him alone. Instead, he unwrapped a stick of fresh charcoal and touched up the outline of the skull, lining each tooth. He used white paint to lighten the light parts, then black paint to darken the rest. He also poured water on it. Then he splattered the canvas with his black brush.

“That’s the problem, you can’t stop,” he said, more than an hour after starting.

Quitting was never really Mr. Brody’s thing. Even in his fallow years, he directed many films and maintained a busy schedule during the pandemic. He starred in “Succession,” as a billionaire investor who takes meetings on his private island. He has starring roles in “Winning Time: The Rise of the Lakers Dynasty,” an upcoming HBO drama series; “Blonde,” a Marilyn Monroe biopic on Netflix; and “See How They Run,” a period detective film.

He’s also starring in “Clean,” a new movie he co-wrote. Mr. Brody, who plays the title character, a sanitation worker with a strict moral code and a knack for ultraviolence, also composed the film’s music.

He doesn’t see painting as separate from his acting. Or write. Or music. “Curiously, they are so related,” he said. “They’re all an extension of the mind and the heart and the turbulent things going on inside.”

He examined his skull and placed it against a trestle table to dry. He could apply gold leaf later. Or work a little deeper. But the play, he thought, was largely finished. He looked happy.

“I want to put all my energy into things that I find interesting and creative,” he said. “And bring a kind of beauty to the world, a tormented and twisted beauty.”