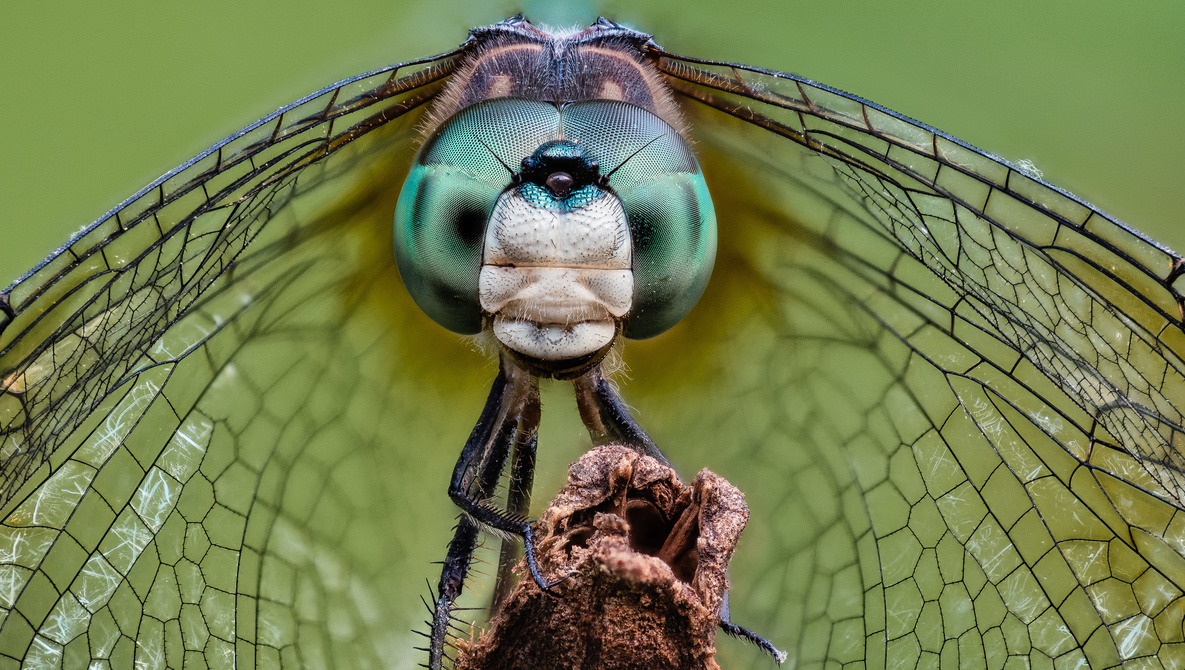 An Interview with Frank Döring: How to Capture Memorable Macro Photographs of Insects and Spiders

Frank Döring is an architectural photographer based in Kentucky, USA via Frankfurt, Germany. He also focuses on personal documentary projects focusing on the Anthropocene.

As a teenager, Frank befriended a photographer who worked for the Associated Press. This photographer became something of a mentor to Frank and taught him the basics of developing film and printing black and white photographs and occasionally invited him on assignments. This early introduction carved out a niche for Frank in photojournalistic and documentary photography.

Frank’s first insect images took place during a trip to Greece. He had some extension tubes, which he vividly describes using to photograph a praying mantis eating its prey. He studied a variety of subjects in college but eventually became a philosophy scholar. Being part of the academy, however, he convinced the faculty to add them to his collection of university photographs.

Eventually he worked as an academic and as part of that moved around regularly. Photography was initially just a hobby that took up a lot of his time but was paid for with his university income. He built a darkroom and bought his first large format camera, which he used for architectural photography. It was no coincidence either, as his wife, an architectural historian, had many contacts with architects. These contacts would commission Frank to photograph their work; the tilt, shift, and lift functions of a large format camera lend themselves well to architectural photography.

The take home message here is to have the perseverance and drive to stick with your craft. It doesn’t matter where you start, but rather the connections you can accumulate along the way.

There is no limit to the quality of your photos other than you.

Frank’s first forays into macro photography were photographing his wife’s collection of seashells, which he had on hand. Working with macro, and I can attest to this from my own experience, he learned a lot about lighting. The smallest adjustments to an object, including the way it is lit, are magnified multiple times!

For me, the whole point of taking pictures… is ultimately to show them to people.

After spending time with relatively large still shells, he moved on to small, lively insects. On the technical side, a macro lens has a magnification of at least 1:1. In practice this means that a 35mm camera, which is usually what a full frame digital camera is, would need a 36x24mm insect to fill the frame. It’s a big insect! This magnification can be increased with extension tubes, but means that the camera and lens combination becomes larger and bulkier.

Like everyone, I take pictures without knowing how or if or when they could fit into a larger context… It’s a bit like writing a good sentence or a paragraph, and we don’t know where yet it fits. start.

Frank is drawn to the unique image. You have to start somewhere. You need to start with just one. But this single image can form the basis of a larger series of images. The aesthetics of a photograph can be important in engaging viewers with an issue, but it is only through the series of photos that one can better contextualize.

The beginning of a series can be more random or more direct, but often it is only retrospectively after Frank started photographing that the project emerges. That is, you might get an idea for a single image or a series of images, but once you’ve photographed that single image or a few to start your series of images, the Where you want to take the series can change. If it’s a personal project, you don’t need to be tied to your original idea. As you shoot a series, what the series is may also be revealed to you.

Besides the fact that the concept of the project changes as you work on it, it is possible that what the project itself is will change. Working on a series over a long period of time, there is not just one photo shoot, but a long practice process where you can shoot and then review what you have photographed. Earlier images that you thought were great might be overshadowed by similar images taken with more skill, or some earlier images might not fit the narrative of the whole series, despite being great images individually.

Working on a larger project, whether it’s a show or a website or a book project, is interesting because it imposes new constraints. And these constraints in turn influence the photos and new photos you take. Thus, it improves the quality of the images. You look for things that are suggested by the work you have already done. You find that some things work better than others. Maybe you find a gap somewhere where you really need a certain type of image.

Don’t buy stuff. At least for a moment.

Frank likes this project because each image is a puzzle. Each insect is different and behaves and interacts differently with the camera. Sitting down and using Pentax binoculars and magnifiers and just observing helps inform the images he could make with them.

He prefers to keep his equipment very minimal and uses natural light. Having ready-to-use lighting is a crutch. With each image a puzzle, Frank thinks working cheaply on an ad hoc basis works best because that way when he needs lighting he can customize it for that bug or image. A little styrofoam or foil can be used as a reflector or filler.

Frank currently uses an Olympus micro four thirds with an Olympus macro lens. Sadly, Frank’s current camera is discontinued, but there are loads of micro four thirds cameras on the market. Additionally, he uses a selection of extension tubes as well as a Raynox 250. He explains that the camera body he uses is faster and lighter than full frame. With nimble little insects, he needs to be able to get in and take an entire stack of images quickly and surreptitiously without startling his subjects. If the insect moves, the stack is destroyed. He chooses to take a stack of 50 images, but may take fewer or more depending on the image. Shooting that many frames in a row takes time, which he thinks micro-four-thirds do faster.

Frank cautions that starting with macro is not so much about taking a particular macro image, but more about learning macro photography and seeing the world through a macro frame of mind rather than having a special equipment. Of course, gear is important, and having a goal that lets you get close enough can go a long way towards that. Alternatively, he recommends a manual aperture lens mounted on an inversion ring for great close-up images. If you’re playing with basic gear, you might decide you don’t like it, so that’s fine. But if you like it, you’ll not only have a better idea of ​​what gear you need, but also what gear to buy.

Frank prefers to work this way. Travel is overrated and bad for the climate anyway, he jokes! Something mundane to you, like insects in a garden in Kentucky, in this case, could be very interesting and exotic to someone who doesn’t live where you are. Photography is basically about taking time and looking and observing things up close. Locals should tell local stories.

See how LACMA’s new Interscope Records show connects artists with the musicians who inspire them, from Lana Del Rey to Dr. Dre