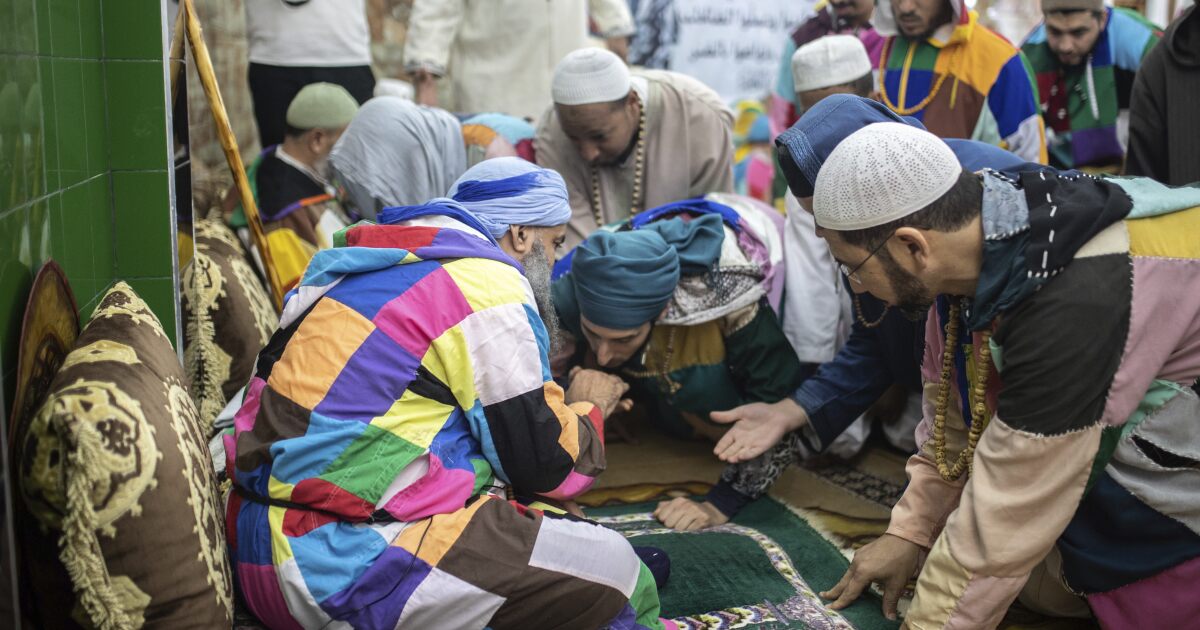 Followers of a Sufi religious order gathered in a Moroccan village near the city of Nador for Prophet Muhammad’s birthday in the first such gathering since the pandemic.

A few hundred worshipers, known as Fuqaras, from France, Tunisia, Ivory Coast and other countries, gathered for the celebration of the week-long Islamic holiday.

The order, the Karkariya, follows a mystical form of Islam recognizable by its unique dress code: a modest but colorful patchwork dress.

In the rituals, they surrounded the leader and founder of their order, Sheikh Mohamed Fawzi al Karkari, kissing his hand and pledging his religious allegiance as they prayed and sang. Later that night, devotees formed circles and danced in fervent movements that symbolize verses from the Quran according to believers.

From March 2020 to July 2021, large religious gatherings in Morocco were banned due to the pandemic. Mosques and thousands of Sufi shrines have also been closed for sporadic periods.

The Sufi Karkariya order was founded relatively recently, where they now meet.

The Sufi term is broad and includes hundreds of movements spread around the world. Each Sufi order is defined by its leader or its books. Morocco has hundreds of Sufi orders and the kingdom encourages and supports their presence as a moderate form of religious devotion, as well as the maintenance of soft power with Sufi orders across West and South Africa. North.

As the order spread beyond Morocco, it ruffled the feathers. In 2017, the Algerian media and some religious figures criticized the Karkariya order for the perception that the order founded by Morocco was encroaching on Algeria in a “religious invasion”.

However, Algerian members could still travel to Morocco, until this year when relations collapsed and Algeria severed diplomatic relations with its neighbor.

Khaled El Jidoui, a Tunisian member who studies computer science at Stanford University and joined alongside his brother and father, says joining the order was “the best decision of my life”, stressing the impact this has had on social and practical aspects. of his life.

Asked about the colorful outfit, he describes the mosaic as his â€œidentityâ€, where each patch represents different facets of his life aiming to â€œmerge into one whiteâ€.

Imad Ali Saeed, a Yemeni researcher and scholar described the pride he felt in being one of Sheikh Al Karkari’s students, noting that he learned of the order’s existence during his research into the Sufi sects in Morocco. convinced him to sign up.

Mohammed Shaibani, a Mauritanian businessman, described a 30-year search across West and North Africa for a mentor and his happiness at having reunited after the pandemic with his colleagues.