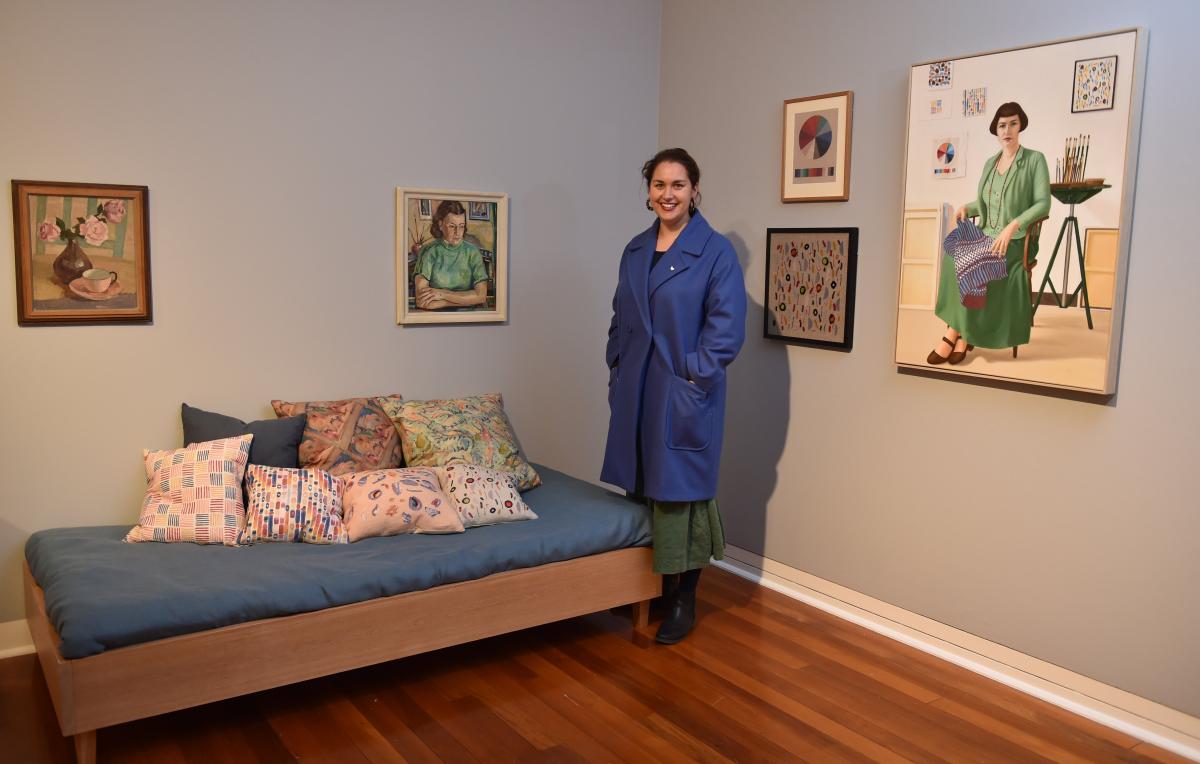 Christchurch artist Julia Holderness builds a bridge through history to a 1940s artists studio in Moray Pl, home to Doris Lusk, Anne Hamblett and Mollie Lawn. She tells Rebecca Fox about repositioning episodes of the story.

They will see aspects of Lusk and his fellow artists Anne Hamblett and Mollie Lawn’s Moray Pl art studio, as seen in mid-1900s photographs reimagined by Holderness.

The daybed Lusk sits on and the vases of flowers surrounding him are given new life in Holderness’s “The Studio” exhibition at the Dunedin Public Art Gallery (DPAG).

Holderness’s practice – she calls herself an installation artist – begins with “historical moments in art”, then develops and extends them.

“To propose in a way that the history of art can be viewed from an artist’s or a creator’s point of view.”

So when she was asked to do a project for DPAG, she wanted to do something Dunedin related.

She knew the three female artists who had been to art school together and who had joined a larger group studio that ended when the men went to war.

So the trio rented their own studio in Moray Pl. There are photographs of space and Lusk.

“They are important because it was Lusk’s first solo exhibition, so the photographs were taken from it. I find it an interesting space. Obviously it’s a workspace but it’s also an exhibition space. and a space of social connection with the daybed, the furniture and they brought things to paint, often flowers in vases. “

Holderness noticed that Hamblett and Lusk both used the same vase in their artwork. So she worked with a ceramist in Christchurch to remake this vase and a teacup which appeared in another work.

â€œThey share resources and work from the same objects in this space. I confuse and sort of intertwine. I guess I see it as a fragment of art history, one moment, with another history. “

This story is the imaginary artist Florence Weir – a recurring character in Holderness’s work – as she seeks to bridge her practice with that of art history.

It begins with a text in which Weir expresses his desire to work in such a group studio and have the kind of environment the three women had.

â€œIn fact, she didn’t have one.

Holderness “remade” Weir’s textile work, in response to paintings by Dunedin artists, on the rimu workbench retrieved from his home studio. The bench is also making its appearance in the exhibition.

â€œShe’s a proxy for other art stories. She can bridge the stories. It’s a way for me to connect local stories in New Zealand and maybe international movements.

“There is a nice ambiguity about it.”

The exhibition also includes seven historical works by Lawn, Hambleton and Lusk as well as works by contemporary artists invited to respond to the work of the studio, such as Julia Holden who painted a portrait of Weir in her studio.

“She and I worked together to figure out what it looked like.”

Other artists to contribute include Kirstin Carlin and Richard Orjis who have created contemporary works responding to historical works.

â€œThere’s a lot of strands. It’s this space that will contain furniture. I didn’t want to reconstruct it from the photo. I guess I’m standing in line. There’s this wonderful daybed that I have. created. “

As part of his research for the exhibit, Holderness discovered writings by historian Peter Entwisle in the Hocken Library, calling it “the impromptu upholstered sofa”.

“So I named it that and created a fabric for the cushions that uses parts of the historical paintings and works of Florence who was a textile designer and I have freestanding screens covered with burlap that will also serve sort of nod to a studio space without rebuilding it. “

Driving Holderness is a need to fill the “gaps” in the history of art.

“I’m looking for those gaps and trying to imagine what could have been. I guess I’m interested in the social side of these women working together.”

She is also interested in oral history and has included a reference to a conversation she had with Lusk’s daughter about a random comment Lusk made about the fabric design once.

“While there is no proof of this, it is a beautiful connection to the works of Florence. It is about accessing artists in different ways.”

For Holderness, it is the idea of â€‹â€‹re-presentations of the past, not of representation.

“To revisit different eras in New Zealand art history and imagine their possible entanglements with other things.”

Weir was “discovered” in 2015 when Holderness was working with Orjis. They were interested in a ceramics studio in Auckland Studio Ceramics which took over the Crown Lynn business.

There were still Crown Lynn molds, so they used them to create a series of vases.

“The story goes that watercolor drawings were discovered in the archives of Florence. She lived most of her life in England but had contacts who returned to New Zealand.”

They made a range of ceramics based on these designs and launched her work in an exhibition called Florence Weir – a game to her name.

“She is known for her ceramics, textiles, painted furniture. It positions her among other artists and she always has connections or companions. Artists or people around you who are part of your background or group – its important to me.”

Weir’s last outing was at the Ilam Campus Gallery where Holderness examined the workbooks she had created while designing costumes and sets for a play.

â€œI remade some of those sets, designs and textiles. Creating a narrative that might or might not have existedâ€¦ I kind of criticize the way material stories are collected, interpreted and presented.

Another of his projects centered around “The Group”, a group of mid-century Christchurch artists.

“She kind of got out of there. She got out of this awareness that there are a lot of women artists who have been overlooked and whose practices haven’t been examined in detail.”

It is an attempt to remind people that history is the product of those who write and edit it.

FOR Holderness, the relationships between artists and their works, the way they work together and are influenced by each other, is important.

His interests arose from a long experience in the arts, but not as an artist.

Holderness left school in the late 1990s to attend fine arts school and received her first degree from the University of Canterbury.

â€œThen came 10 years of traveling and working in the arts, often in marketing roles. I worked for a long time for the City Gallery in Wellington. I was on the other side, interested in producing exhibits.

Upon her return from London, she made the “sudden decision” in her mid-30s to go to Auckland University of Technology (AUT) and earn an honors degree in visual arts.

â€œI got back to doing it. I did ceramics and this whole project developed around The Group and these group catalogs which served as a starting point to redo, reconsider these catalogs from the 40s, 50s and 60s.

â€œIt was interesting, ceramics and textiles were listed on the last pages of the catalogs. I have remade them and I have remade works in response to them.

This honorary year turned into an invitation and a scholarship to do her PhD which she is currently completing.

She therefore works on one project at a time.

While her physical practice has recently mostly involved textile work, she will look to whatever she needs to create to tell the story she is working on.

“My practice is very collaborative. I work with people if I can’t do things on my own. I’m really interested in working with other manufacturers.”

His doctorate is on archiving and working in fiction. Once “The Studio” is finished, she plans to focus on writing her thesis with the goal of completing it next year. She also has her final doctoral thesis in Auckland next year.

â€œI have a lot of ideas for my last show where I could end up doing something very different. I’m really interested in the intersections between design and art and textiles, ceramics and artistic creation that could to be outside the fine arts. “

AWS Hosting: What It Is And How It Underpins The Internet