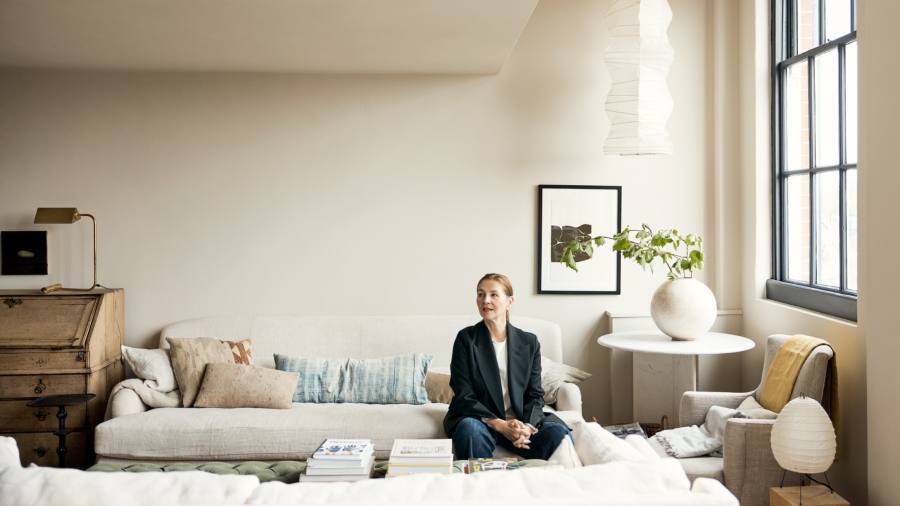 There is a special harmony in the house of Cassandra Ellis. Inside, the atmosphere is supernaturally calm. For anyone familiar with Atelier Ellis, the independent paint business (originally called Ellis Paints) set up by the New Zealand-born designer in 2018, this comes as no surprise. Recognized for her sensitivity to color, Ellis approaches the world of painting with an artist’s eye. In a crowded and often statement-oriented market, her aesthetic, embodied in the annual color collections she conjures up and produces by hand in her studio in a former Victorian laundry room in Battersea, is quietly beautiful.

This aesthetic permeates every aspect of Ellis’ life. Notably, the penthouse apartment she shares with her husband Ed Prichard, her daughter Frankie and their dogs Mr Darcy, a chocolate Labrador and the Australian terrier Otis. It’s a place with a visual stillness that reflects their thoughtful yet welcoming way of life. Located inside what was once Lavender Hill School, a coeducational primary built in 1891 by TJ Bailey, the plush 2,000 square foot South London interior is an ode to lateral living. The handsome red-brick site, known as The Village, has been called out by everyone from David Linley to Kelly Hoppen since it was converted into studios and apartments in the late 1990s. Ellis’ Own Corner is accessed via the Old Boys Entrance and sits across from what was once the photo studio of provocative image maker Bob Carlos Clarke.

When Ellis first saw the duplex in 2015, it had been languishing on the market for more than two years. The interior, she said, was a nightmare of floral wallpaper and faux pine paneling with an overbearing kitchen island. Apart from a fine Victorian skylight in the hall, all original features and fireplaces had been removed. “It felt like I was in a really bad, very expensive Dorset cottage,” she says. Beyond the flashy, old-fashioned surface, Ellis saw promise in the direction of light in space. Rather than hiring an architect, she worked with a draftsman to take the interior apart and start over. “There was nothing that could be saved,” she said. “We had to fill 12 dumpsters.”

As the extension was not an option, Ellis completely redesigned the space over a period of nine months, cutting and sculpting it to suit the couple’s needs. “It’s now such a nice, simple, easy-going place to live,” says Ellis, who moved from a classic terraced house in Peckham, which she’s since equated with cramped hallways and superfluous bedrooms. Therefore, she saw the move as a chance to rebalance and simplify, designing a home without wasted space. The resulting interior has a flowing European style, in a row, with generously proportioned rooms branching off either side of the central hallway. Light streams in from the living room to the north, which is connected by a long and extensive library of art, design and cooking books, and from the kitchen and dining room to the south.

Convenient for 21-year-old Frankie, who retreats here whenever she feels like it, there’s a separate stairwell that leads to her self-contained ‘mini-apartment’ with its own bedroom and bathroom. The other goes up to the master bedroom and bathroom, the mezzanine of which overlooks London through the epic window that begins in the sunken living room. “There’s something exciting about living high up in the city,” says Ellis. On a clear day, the view stretches from Chelsea Harbor to the city.

There’s something exciting about living high up in the city

The interior was imagined with the same intuition that Ellis applies when designing his paintings, and there is a narrative behind the design. “I imagined a story describing how the place should be,” she says, pointing to the emphasis on cooking and reading, and the rooms configured for both contemplation and community. This is a method that has proven to be extraordinarily effective. Whether on their own or hosting a crowd of 30 for a celebratory lunch, as Ellis and Prichard did when they married last September, it’s a lovely spot.

Drawing on a trio of materials – English oak for the floors, pippy oak for the bespoke benches and shelving, and silver emperador marble for the surfaces throughout – Ellis has created an elegant yet understated sanctuary. “Houses are often very plain or overly decorated,” she says. “But it’s a very tactile apartment. I wanted it to be relaxed and quiet, but lots to browse and look at. There’s an eclectic mix of art and design that ranges from Isamu Noguchi lights that are scattered everywhere to Howard Hodgkin canvases to eBay finds and beach combing. There are plenty of personal touches: A bright self-portrait of Prichard’s mother hangs in the stairwell, while in the bedroom, an alcove of custom shelving serves as a shrine to loved ones filled with drawings and paintings. precious ephemera, family photos and keepsakes.

Materiality is key to Ellis’ approach. She used brass objects here and there to accentuate the newly refreshed palette – from a boxed ivy specimen by artist Sophie Coryndon to a leaf-shaped wall lamp by Italian designer Tommaso Barbi. In the bedroom, an embroidered 1920s room divider featuring George and the Dragon sits next to a wonky but wondrous Georgian table by Jolly Folke that has been burnt black using ancient Japanese techniques of shou sugi ban. Downstairs in the long library is a bench from the Viennese Secession movement, built in the 1890s by Austrian furniture makers Jacob & Josef Kohn. “Sitting here with a book is such a joyful thing for me,” Ellis says. With its elaborate relief design, the seat, which oscillates between art nouveau and modernism, is framed by a wall tapestry collected long ago in New Zealand. Often called barkcloth, this Pacific Island cloth is made from the inner bark, usually of a wild fig or mulberry tree, which is decorated with paint or vegetable dye.

It’s a throwback to one of Ellis’ previous callings – and a lifelong passion for textiles. From the 1990s, she worked in set design and events for television and magazines between London and Auckland before settling permanently in the capital in 2008, where she wrote books on quilting and textiles. antiques and sold custom creations. Daughter of an accomplished seamstress, she says: “I have always known how to sew, dye and weave. The sound of a sewing machine still puts me to sleep. Take a look around his apartment and you’ll be tricked into finding a new piece of fabric. Beds, sofas and armchairs are dotted with her indigo-dyed patchwork covers and each cushion is upholstered in faded linen or hemp, some embellished with sumptuous scraps of fabric that she accumulates. She spends free time putting them together to make gifts for friends.

There is a very clear line to be drawn between the faded patina of these time-worn textiles and the nuanced, earthy paints of Atelier Ellis. “I always wanted to create the colors that I saw in my mind when I was working with these old fabrics,” she says. Ellis believes that creating colors with a more grounded base, which contain a multitude of pigments that react to changes in light, makes rooms and dwellers happier. Instead of bright whites, Khadi’s soft, deep, warm tones bring warmth to the kitchen, or brilliantly bold distressed black in Frankie’s bedroom. “I’ve always equated color with place and feeling,” says Ellis, who started mixing paints as a child, decorating and redecorating the playhouse her grandfather created in the garden of his home in Papakura. , a southern suburb of Auckland, with its own house. color mixtures.

Each of the couple’s homes – they have converted and sold seven properties since meeting in 2007 – have served as canvases for Atelier Ellis. Rather than adhering to the dictates of design, be it Bloomsbury or Brutalism, Ellis believes the power of color lies in guessing what suits the place and the person. She works with architects, designers and creatives including Mayfair emporium The New Craftsmen and furniture designer Fred Rigby, often creating bespoke palettes for entire projects that can start with a single brief – one architect asked an entire house in Turneresque watercolors.

Ellis is finishing up her latest collection, released in September, which is a celebration of eclecticism and human idiosyncrasy in interiors, borrowing from the works of everyone from Rita Angus to Amrita Sher-Gil. In an age of visual bombardment, Ellis says, people can get stuck when it comes to painting their homes. There is a danger in following trends without thinking. Ellis encourages clients to think about what they really like and need. “We all have personal associations with color. It’s about giving you permission to choose,” she says. While tones can tell stories, the key to finding yours isn’t on Instagram, but within.