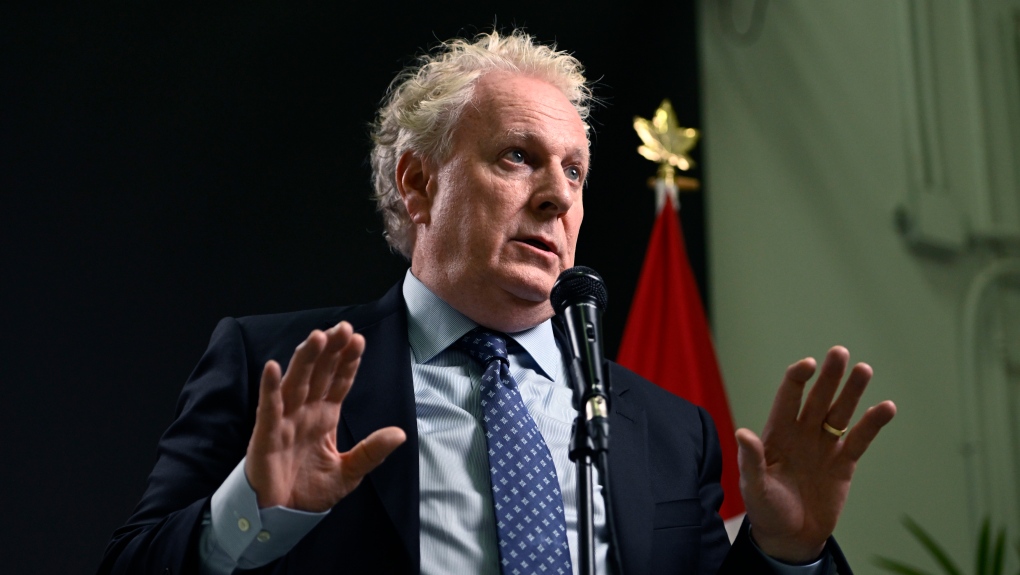 Jean Charest spent the last official debate of the federal Conservative leadership race on Wednesday pointing out that his experience as a political leader is what the party needs to pull together.

Conservative MP Scott Aitchison, former mayor of Huntsville, Ont., who was first elected to the House of Commons in 2019, said he would retain his seat regardless of the outcome.

“Can you honestly say that if you don’t win this race you will be here on 9/11 to help Leslyn (Lewis), Pierre (Poilievre) and me unite our party?” Aitchison asked Charest in the debate.

While delivering his last speech to members, Charest said he was a lifelong Conservative.

“To answer Scott’s question, I’ve been a Conservative all my life. I believe in Conservative values,” said Charest, who led the Quebec Liberals, the province’s main federalist party, for 14 years. “I led a coalition government in Quebec because as a Conservative, I believed in the unity of this country.”

Pressed again after the debate ended, Charest told reporters he was focused on winning.

Charest, who is working to persuade party members to choose him as the first choice in the preferential ballot, is counting on votes from those in his home province of Quebec, as well as Ontario and Atlantic Canada.

Charest pointed out during the debate that a majority of the more than 670,000 members who have registered to vote have not yet done so, suggesting they are still making up their minds.

The Conservative Party reported on Wednesday that around 150,000 ballots had been returned so far before the September 6 deadline for voting. He estimates that around 400,000 people are new to the party.

Throughout the evening, Charest repeatedly emphasized how he showed up to the event, unlike Poilievre, the Ottawa-area MP considered Charest’s main rival, and with Lewis, an MP rookie who placed third in the 2020 party leadership race.

“If we want to unite the party, you have to show up,” Charest said.

He also said a candidate who doesn’t show up for the leadership debate “is like a fish that says it doesn’t want to swim in the ocean.”

In Regina, Poilievre told a campaign rally on Wednesday he was happy to be with the crowd.

“I could have been locked in a small hotel room around a small table listening to a drone of the defeated Liberal premier,” Poilievre said in a video of the event streamed live on YouTube.

The party has hosted the debate for the past two weeks and opted for a low-key setup, held in a small Ottawa studio with no in-person audience.

The three participating candidates – Aitchison, Charest and Roman Baber, a former member of the Ontario Legislative Assembly – were crammed into a small photography studio and seated around a table, rather than standing on podiums.

Before the debate began, Charest, who had pushed the party to hold a third official debate, called the setup “weird”, adding, “I’ve never seen anything like it.”

Poilievre and Lewis face a $50,000 fine for skipping the event. Although party rules state that the penalty for any candidate who decides to skip an official debate is automatic, the party leadership election organizing committee will have the final say.

The three candidates began by reflecting on what they heard from Canadians and party members during the contest, which began after the Conservative caucus voted to oust former leader Erin O’Toole from the top job. in February.

Charest ran as the only candidate who could change the Conservative Party’s record of losing back-to-back federal elections – in 2015, 2019 and 2021 – to the Liberals led by Prime Minister Justin Trudeau, after spending nine years in power under Stephen Harper.

Baber, who was kicked out of Ontario Premier Doug Ford’s caucus for opposing the shutdowns, said he will continue to stand up for Canadians affected by COVID-19 vaccination mandates.

He also stressed that he was not afraid to stand up for his values, including against the Liberals’ climate agenda.

At one point he said that to deal with climate change he would seek to increase the amount of trees planted each year in the country.

Aitchison, who throughout the race struck an optimistic tone, said he believed Canada could deliver on its commitment to net-zero emissions while canceling the national carbon price, which is the preferred rallying cry. party loyalists.

Charest pledged to remove the federal price on consumer goods while imposing a levy on the biggest emitters.

He said the party must present a credible climate plan if it hopes to win its chance in government and highlighted his experience in developing climate plans as premier of Quebec.

“A slogan is not a climate plan,” said Charest, who served as federal environment minister under former Prime Minister Brian Mulroney.

The debate, which included 45 minutes in English followed by an equal amount of time in French, featured more friendly discussion than contests between candidates.

Along with answering questions about fighting climate change, they also spoke about affordability, securing travel to Canada, and promoting reconciliation with Indigenous peoples.

Party chairman Rob Batherson, who moderated the debate, told the candidates and viewers “we don’t have any sad paperclips in this debate.”

He was referring to the sound effects used during the official English-language debate in May, which many party members, including Poilievre, strongly criticized.


This report from The Canadian Press was first published on August 3, 2022.


With files from Sarah Ritchie.