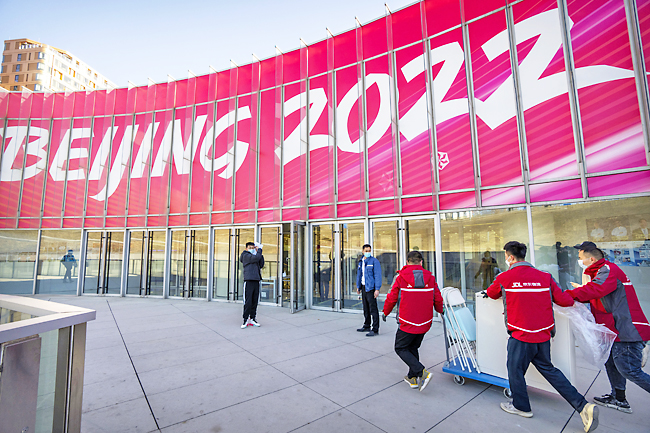 It will be the first time that the Chinese capital will become the first city to host both the summer and winter editions of the Olympic Games. The 2008 Summer Olympics were also held in Beijing.

He visited the National Speed ​​Skating Oval, the main media center, the athletes’ village, the operations command center during the games and a winter sports training base, learning about the preparatory work. Games as well as Chinese athletes’ preparations for the Games.

Speaking at a press conference, Chinese Foreign Ministry spokesman Wang Wenbin said, “You may have all noted that President Xi said in his New Year’s speech that ‘we will not spare no effort to present great Games to the world ”. On the first working day after the New Year’s holidays, President Xi paid another field visit to inspect preparations for the Olympic and Paralympic Games. This fully demonstrates that the Party and the Chinese government are prioritizing preparations and sending three key messages to the international community.

First, he said, “China lives up to its word. President Xi stressed that this was China’s solemn pledge to ensure that the Beijing Olympic and Paralympic Winter Games are “a full success.” For more than six years since Beijing won the bid to host the Olympic Games, China has focused on popularizing winter sports to the south, west and east.

“As a result, more and more Chinese have taken to ice rinks and snow resorts, making winter sports popular and achieving the goal of ‘involving 300 million people in winter sports.’ The principles of hosting a “green, inclusive, open and clean” Olympic Games were effectively implemented in the construction of venues, the organization of events and the provision of services for the Games. “

Second, he said, “China is ready. After years of effort, the preparations are almost ready. In terms of event organization, the “Experience Beijing” test matches were successfully concluded. The 12 sports venues in Beijing, Yanqing and Zhangjiakou were built and commissioned with certification from the World Association of International Sports Federations.

“The service and support system has been completed, covering the Olympic Village, volunteers, media center, medical assistance and contract hotels. “

“Following the requirements of the playbooks, the Chinese side is optimizing the double closed-loop management process by zone adapted to the different categories of participants and strictly applying the epidemic control protocols.

“China will take targeted and science-based epidemic prevention and control measures, do everything possible to prevent infection, and ensure the health and safety of all staff participating in Beijing 2022.

“Polish Ski Association (PZN) President Apoloniusz Tajner said China made the right decision to apply strict COVID-19 restrictions and because of that” I will feel safe during the competition in Beijing “.

In addition, Chinese Foreign Ministry spokesperson Zhao Lijian also pointed out in a recent statement, “2021 has been a pivotal year with preparatory work on all fronts steadily progressing towards full completion. .

“It has been a year of many major events in the Olympic calendar. For example, all the competition venues for the Games have been prepared; the Beijing 2022 Olympic torch bearing the name “Flying” was presented to the world; the official motto “Together for a Shared Future” and official posters were published; the flame-lighting, handover and welcome ceremonies were successful; Olympic and Paralympic medals named “Tongxin”, as well as uniforms and equipment were all unveiled; and ice sports test events were successfully organized.

While advancing efficient and high-level Games preparation, he added, “We have also ensured strong epidemic prevention and control to protect the safety and health of all staff participating in the Games as well as public. “

Excellent preparatory work for the Beijing Winter Olympics was also seen with athletes and people from many countries, including international organizations, eagerly awaiting the Beijing Olympics. Preparations for the Games have entered the home stretch.

Beijing, a city that will host both the Summer and Winter Olympics, will present a streamlined, safe and splendid event for the world.

On December 14, 2021, Vice Premier Han Zheng, also a member of the Standing Committee of the Political Bureau of the Communist Party of China Central Committee and head of a leading group overseeing preparations for Beijing 2022, stressed “the need to give the priority to prevention. and controlling the COVID-19 pandemic to ensure a simple, safe and beautiful 2022 Olympic and Paralympic Winter Games ”.

Han also noted that the pandemic is a severe test for Games organizers and urged everyone to remain vigilant at all times and strictly follow COVID-19 countermeasures.

Han inspected several sites during a tour of Beijing on December 14, including the National Speed ​​Skating Ring, the Olympic Winter Village, the Main Media Center, the National Indoor Stadium and the National Swimming Center.

Another landmark achievement of the Beijing 2022 Winter Olympics is the use of new cutting-edge technologies with which Beijing aspires to host a smart Winter Olympics.

According to the Chinese Embassy’s newsletter, from competition facilities and sports equipment to support services, the development of the Olympic Winter Games is inseparable from science and technology.

Now, winter sports can reach a wider audience with the constant upgrading of science and technology, and athletes are more empowered to set world records.

From the 5th Winter Olympics in St. Moritz, Switzerland, to the 23rd Winter Olympics in Pyeongchang, Korea, more precise timing, more advanced sports equipment and ultra-high definition live broadcasts have all added an attraction to the Games.

For the next Olympic Winter Games Beijing 2022, several new technologies will support its smooth running. During the 24th Winter Olympics, full 5G coverage will be achieved in and around Olympic venues.

In addition, intelligent robots will be introduced at Olympic venues and relevant scenic spots to provide baggage delivery and other forms of assistance to athletes and coaches.

The Olympic Villages Big Data Platform brings together information on safety, the environment, energy consumption and other smart services to quickly respond to emergencies.

In terms of environmental protection, energy efficient and clean energy vehicles will be used to provide traffic services, including hydrogen buses, pure electric cars and hybrid cars. Up to 85.84% of the total vehicles will be clean during the Olympics, setting a new record compared to the previous version.

The organizers will also use China’s high-speed moving target tracking and camera shooting system. The system can quickly locate the target and automatically track and film Olympic downhill skiers moving at a high speed of 170 kilometers per hour.

The week in Pune: catch a murderer, work with stage lights or get lost in pandemic portraits