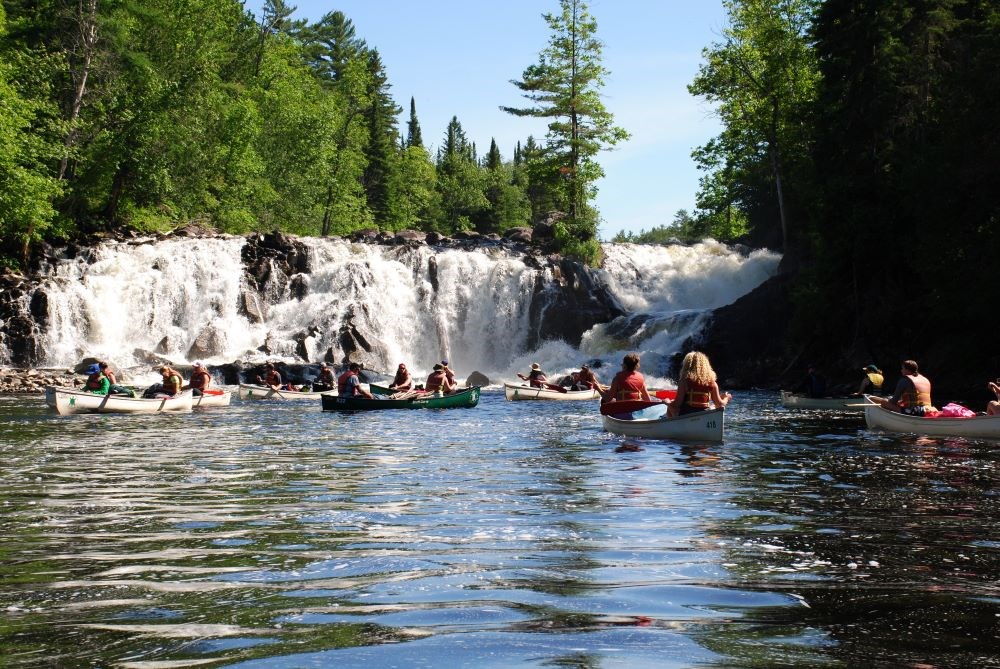 Follow back roads to an unmissable canoe route (6 photos)

There’s a rock-carved “dog’s face” featured in Ripley’s Believe It or Not, a spirit cave, waterfall cliffs, vistas, potholes, and natural/cultural heritage all at once and accessible. It could have been a ship canal and you can take part in a marathon canoe race all the way down this river.

There are so many places and day and night canoe/kayak routes to take your boats across Northern Ontario. We are blessed with countless mighty rivers and interconnected waterways.

These waters served as the original routes for the First Nations of this land, and later for explorers, traders and settlers. They continue to attract outdoor enthusiasts and adventurers today. Often we are looking for detailed information.

This year, if you’re a beginner, a heritage buff, or looking for a day of paddling or a short canoe trip to start and end, the Mattawa River is on your bucket list. There are so many reasons why.

The Mattawa River is in our backyard and is one of Canada’s iconic rivers. It was the second river to be designated a Canadian Heritage River. The French River was the first. I was on a committee that extended the boundaries of the Mattawa River in 1999; we presented in traveller’s attire.

The Mattawa was designated in 1988 for its exceptional historical, natural and recreational values. It was later expanded to 76 km in 1999. The river was an essential link in the fur trade route.

Today, paddlers follow the course and scale portages that have not changed in over 300 years.

The Mattawa River provides a natural link between the Ottawa River and Lake Nipissing, following a 600 million year old geological fault line across the Canadian Shield. Visible at Lazy Falls, this is the old Niagara Falls of the North.

It was a post-glacial weir that once drained the Great Lakes into the Ottawa River. Geological evidence of the river’s past can be found in the Portage de Talon glacial potholes and numerous abandoned channels, 12 to 15 meters above the current river level. Admire the expansive view of the Mattawa River Valley at Elm Point.

The river is associated with First Nations history, the exploration of Canada and the fur trade. Mattawa, in Algonquin, means “junction of waterways” and “river with walls that echo its current”. For First Nations, as well as Europeans who came to the area in the 1600s, this waterway was a vital link between the St. Lawrence Valley and the upper Great Lakes. Archaeological evidence from 28 sites suggests that the waterway has been used by Indigenous peoples for over 6,000 years. Stop and see the ocher mine a source of distemper for the pictograms.

Samuel de Champlain’s interpreter Étienne Brûlé traveled inland with a band of Algonquins in 1610, and five years later accompanied a party of Hurons on the road, producing the first published map of the region.

The river then becomes the great road to the west for traders and missionaries who follow it, you walk in the footsteps of legends.

This river was an important link in the trade network that eventually spread across the continent. This short stretch was perhaps the most demanding on the 2,000 km Voyageur waterway between Montreal and Fort William, as it included 14 of the route’s 38 portages. Nine of these portages have survived roughly as they were in Voyageur times, and all still bear their original French names. Then there was the idea of ​​using the Mattawa for part of the Georgian Bay Ship Canal see website.

The Mattawa offers an exceptional canoeing and cultural experience for lake and river paddlers. The designated section is mostly within the boundaries of Mattawa and Samuel de Champlain Provincial Parks, which are managed by Ontario Parks. The waterway’s place in Canadian history is commemorated by provincial and national historic site plaques in the town of Mattawa and at Champlain Park in North Bay, at the Lake Nipissing end of the historic La Vase portages.

Roy MacGregor is the acclaimed and bestselling Canadian author of canoe country.

I asked Roy about the Mattawa.

“I have canoed the full length of it and love it.

“The Mattawa was THE link between the Montreal-Outaouais River and the West, of course, but also the route of the priests who came to Huronia. In terms of furs and timber, it was as important as the Outaouais itself. a beautiful river and one of the great paddles in Canada.

“It was at Talon Portage that I saw firsthand what difficult terrain an overdose of effort can do to one on a seemingly relaxing canoe trip… To see this man struggling so stupidly on the highs Talon Portage rocks made me think of all those travelers who would have taken the exact same route, carrying back and forth…there is a rock formation known as the “Dog Face” that is compelling enough to have featured in Ripley’s Believe It or Not in the 1950s.

“At Pimisi Bay there is another rock – the Mammoth – with a high flat back where the natives used to lay offerings to enable them to cross the coming rapids safely.”

You will want to stop here and do the same

“And further downstream, near the breathtaking Sloth Falls, is the mysterious Gate of Hell-Gate of Hell,” MacGregor continues. “It is a deep hole dug in the embankment, the hole surrounded by hematite of iron oxide rock that the natives of the area once used for cave paintings… On the side of a hill on the north side of the river recorded Alexander Henry, which passed in the summer of 1861.

“There is a curious cave, of which wonderful stories are told by travelers.”

See how much this ocher really means to others.

There are also potholes at Talon Falls and here is the map of potholes at the falls, many of which are specifically located by GPS.

At the western end of the Mattawa River and Trout Lake are the famous La Vase portages.

Bernie Stockerrmans is the President of Friends of La Vase Portages. Click here to visit the site.

The La Vase Portages are a 10 km (6.2 mile) section of the historic Voyageur canoe route, which connects Trout Lake and Lake Nipissing.

Collectives have been working since the 1990s to restore the historic link between two watersheds and a height of land.

“The Mattawa River is an easy weekend paddling excursion that introduces you to many historic places that travelers and early explorers traveled and wrote about,” Stockermans said. “When you get to the headwaters of the Mattawa River at Trout Lake, I invite you to check out La Vase Portage to Lake Nipissing. This portage crosses the height of land between the Mattawa/Ottawa River watershed that flows to the east and the watershed of the French River which flows to the west.

From this author’s perspective, I may have paddled the Mattawa more than most. It’s been in my blood since I was a teenager, and leading canoe trips, I would usually paddle it two or three times a year.

I can’t get enough of the scenery and my favorite section is Pimisi Bay, up Talon Falls, then back down a bit through the portages, past Parresseux Falls and the Ocher Mine, a stop to walk to Elm Point View and then to Samuel de Champlain Provincial Park; day or night, you will not be disappointed.

At the park, visit the Mattawa River Visitor Center, it showcases natural and cultural history and the highlight is the replica Master’s Canoes which are believed to have carried a dozen travelers.

In most places of portage there are troughs showing the footprints of people walking in the same spot for over three thousand years; the best is at the upper end of the portage at Campion Rapids in Samuel de Champlain Provincial Park, see map link below.

The Mattawa River heritage map first published in 1997 by this author has recently been updated and is now being reissued. The double-sided multicolored thematic map has been updated and modified and includes GPS coordinates and an inset of the Pimisi Bay to Elm Point section of the river which features most of the original rapids and portages.

It is a standard topographic scale of 1:50,000 and combines topographic maps of North Bay and Mattawa. It is comprehensive and detailed – a book in itself. It’s $20 plus shipping and a fundraiser for the Canadian Center for Ecology – two flat or folded.

Here’s a giveaway of information, a link to a detailed map with coordinates and trivia. There are many day accesses that highlight the parts of the river you want to access.

If you want the feel of a recreational canoe marathon race, take part in one of the longest races in Canada (45 years) through the North Bay-Mattawa Conservation Authority, this year on July 23, it’s only 64 km see this link. Can you break the 1995 record for the fastest finish of five hours, 27 minutes and 53 seconds? I did this race but not so fast!

Here’s more on ‘Canoe Country’ through an old Northern Ontario Travel article and more on the Mattawa see this link. There is now a lot of information to become a traveler. National Canoe Day is June 26. This paddling season, embrace our heritage by paddling the back roads.

Art Hounds recommends photography on the fight for racial justice