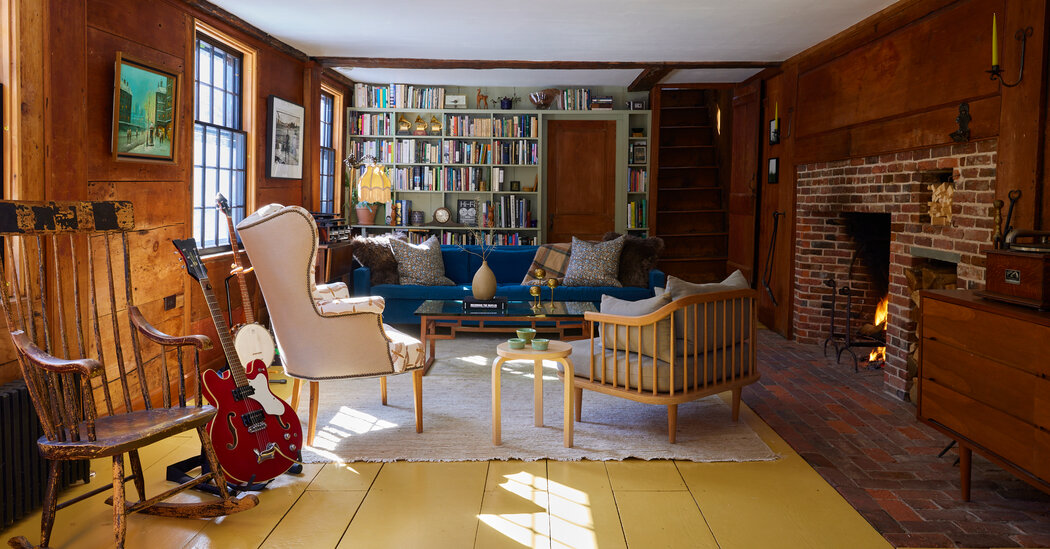 From Los Angeles Concrete to a Vermont Farm

This article is part of our latest special Design file, on the new creative paths shaped by the pandemic.

In 2007, when Kathryn Alverson and Rich Costey bought a 1783 farmhouse near Putney, Vermont as a weekend getaway from their home in Manhattan’s East Village, the idea of ​​maybe there living full time one day didn’t even cross their minds.

Mr. Costey, a Grammy Award-winning music producer and mixer who has worked with bands such as Foo Fighters, Interpol and Death Cab for Cutie, was busy at Electric Lady Studios, and Ms. Alverson was pursuing graduate studies in photography, philosophy and art history at the New School.

Also, with no insulation or heating system beyond the wood-burning fireplace, the house was barely habitable in all four seasons.

But gradually, as the couple’s situation changed, so did the house. A series of repair and renovation projects have not only made it livable all year round; he transformed the house into a welcoming family home.

As they got to know the property a little better, the Alverson-Costeys discovers a host of problems: the foundation is sagging, the attic is full of bats, and the old windows produce lead-laden dust every time they open or close.

Working with a team of restoration specialists, they gradually solved the house’s most pressing problems while insisting that each new intervention seemed almost invisible.

They raised the house, repaired the foundation and replaced the floor joists. They added heaters and some insulation. They kicked the bats out (mostly). And they worked with a reduction prime contractor to encapsulate the painted wood floors before replacing the old single-glazed windows with new, historically-accurate single-glazed windows.

“The goal was to get a lot of work done without looking like a lot of work,” said Costey, 52. Even though the house seemed unchanged, he added, “we were shoveling hordes of cash into this property.

“For a while, we really felt like we were in that ‘The Money Pit’ movie,” said Ms Alverson, 54.

After moving to Los Angeles in 2009 shortly before the arrival of their daughter, Simone, they became preoccupied with their lives on the West Coast. “We didn’t come back here often and considered selling it because we were so busy,” Mr Costey said.

However, they never managed to put the house up for sale, which was lucky because when the pandemic hit in 2020, everything changed. Prevented from going to his studio, Mr Costey tried working from home but found it frustrating.

Ms Alverson’s mother, Gina Alverson, then 92 and living with dementia, was living with the family, and the couple were worried she would catch Covid-19. Simone’s school switched to online learning, which the young student found unsatisfying.

After looting broke out near Mr. Costey’s Santa Monica studio in May 2020, he rushed to save his most valuable gear by loading it into his car. It was around this time that living in the city “kind of stopped being fun,” he said. “We were, like, ‘What are we doing here?'”

In Vermont, they had 60 acres of wooded privacy. Simone could attend classes in person. And Mr. Costey had an acquaintance who had built Guilford Sound, a world-class recording studio near their farm, where he could work.

It didn’t take long for them to decide to sell their California home and move to Vermont permanently. The only question was how to get there. “We couldn’t just take my mum with dementia, in the middle of Covid, and get on a plane,” Ms Alverson said. “So we thought we could rent a motorhome, but everyone in the country during the summer of 2020 was renting a motorhome, so there was no motorhome.”

It was then that Mr. Costey had an idea: with so many concerts canceled across the country, there were surely idle tour buses. “I called the tour manager at Muse, and he referred me to a friend who runs a tour bus company that rents to people like Post Malone,” he said. His intuition was right: the buses with drivers were ready to leave.

In August, the couple loaded their daughter, mother, dog and essential household items onto a rock star-worthy tour bus, and two drivers (who took Covid tests before the trip) made the trip non-stop across the country in 48 hours.

As they settled into their new life in Vermont, they had to adapt to tight spaces: the 1,000 square foot farmhouse had only one bedroom and Ms. Alverson’s mother ended up sleeping on the couch in the living room. To make the property more livable, they hired Barbara Bestor, an architect based in Los Angeles who had previously renovated a home for them in California.

Ms. Bestor is best known for designing modernist compounds, but didn’t shy away from tackling a century-old farmhouse. “I’m from Cambridge, Mass., originally, and part of my schtick is the stuff you get from 1700s homes,” she said, noting that the age-old monochromatic treatment of siding and windows still looks contemporary today. “I think you can steal from the old to give to the new.”

First, Ms. Bestor transformed the old bat-filled attic into an 800-square-foot second floor that added two bedrooms and a bathroom. A new insulated roof and skylights have increased the open space. She was careful to leave the roughly hewn rafters and collar ties exposed, and to remove, refinish and then reinstall the old parquet on top of the new recycled denim insulation.

Construction of the second floor took three months in the fall of 2020, during which time the family lived in a nearby rental. Since then, they have been working with Ms. Bestor on plans for a new structure to replace the old attached barn, which they found unsalvageable, complete with a loft-like living space, kitchen, studio and cloakroom. they plan to build in the next few years. year.

But even before this second phase began, they discovered that life in Vermont was pretty idyllic. Mr. Costey is just as productive as he was in Santa Monica, and when he has to travel to London, where he works frequently, the flight is relatively short from Boston.

Ms. Alverson is focusing on her photography again and has started rowing the Connecticut River. Simone thrives in her new school and has adopted alpine ski racing.

Gina Alverson found solace in the bucolic landscape. “We have this beautiful 200-year-old apple tree in the garden,” her daughter said. Their first summer in Vermont “she would sit under that tree, look at the view, and say, ‘This is heaven’.” She died in February 2021, aged 93.