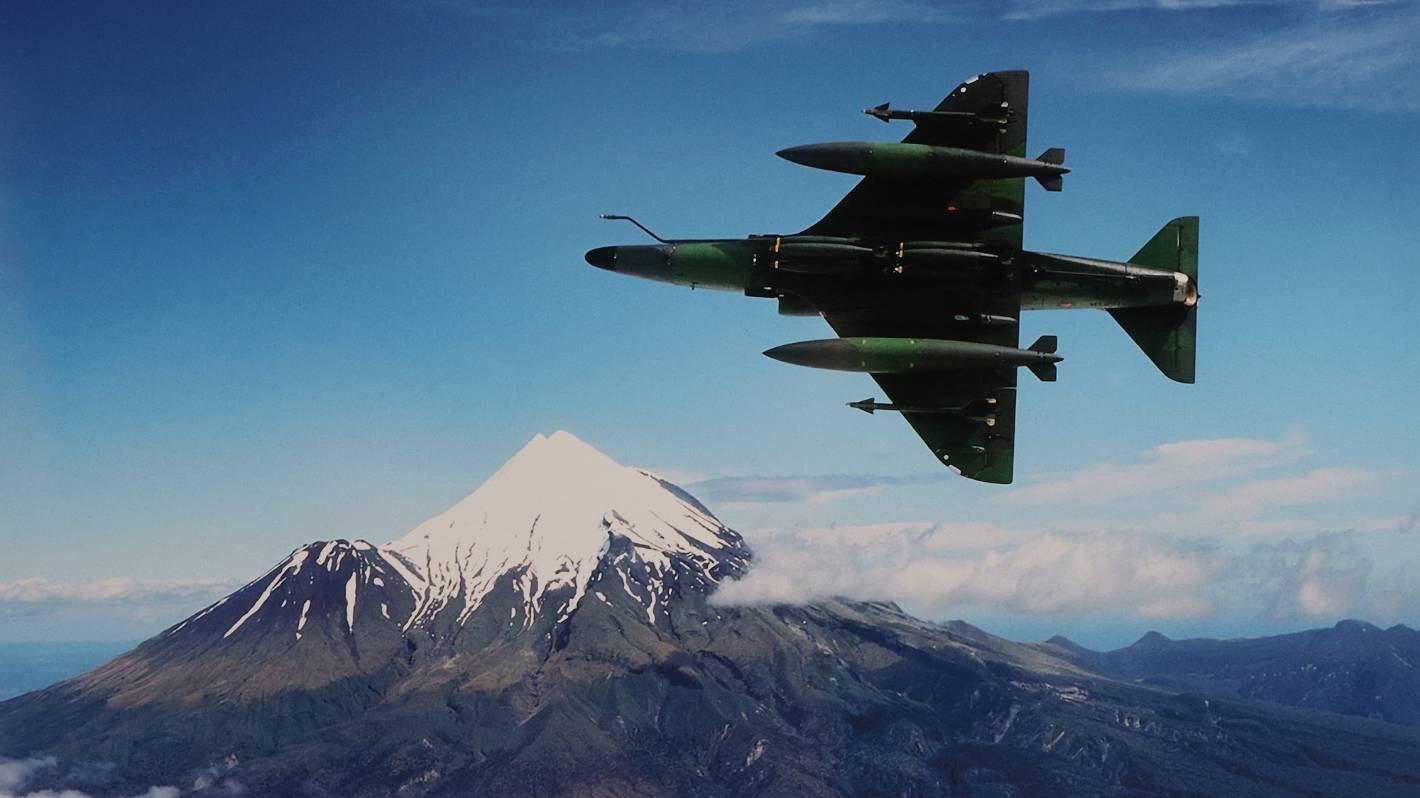 How I Shot: The Skyhawk, the Maunga, and a Photographer’s Dream Come True

When photographer Ross Land got the chance to fly in a Sky Hawk, he asked to ride past his favorite mountain.

When the first Top Gun movie was released in 1986, photographer Ross Land was called in to fly with the nation’s top fighter pilots.

Land had just started freelancing after an eight-year stint on the New Zealand Herald when North South the magazine’s editor, Robyn Langwell, decided to do an article on New Zealand’s own Top Gun.

Journalist Stephen O’Meagher and Land were sent to Ohakea Air Force Base near Bulls to find out what it’s like to fly in a jet fighter.

The four-day mission was designated as a photo sortie by the New Zealand Air Force and the pilots followed Land’s orders.

“They asked ‘where do you want to go’ and I said ‘to see my favorite mountain'”, he says.

The photo he took with Taranaki Maunga in the background features a McConnell-Douglas A4 Skyhawk fully loaded with weapons and long-range belly tanks.

Dressed in anti-G suits, the photographer and journalist spent many hours criss-crossing the skies in A4K Skyhawks, where K stands for the two-seater training version.

“If you don’t wear the suit, you pass out,” Land says.

When pilots “shoot a full G”, the anti-G suits inflate around their stomachs and thighs so that blood cannot flow onto their bodies away from their brains.

Land says he felt the forces of gravity, but at a much lower level than depicted in the later Top Gun movie.

“The Four-G is probably considered lightweight, but it certainly didn’t feel it. The first time I experienced it in the Skyhawk, sweat ran out of my helmet and into my eyes and I couldn’t see. I was sweating with excitement and fear.

During this mission, Land even got to pilot a Skyhawk.

“It was absolutely amazing, a dream come true; it was just in a holding pattern above rocket range on the coast of Manawatu as we waited our turn to shoot the target,” says Land, who began his photography career at Taranaki Newspapers Ltd. in 1972.

“I was always fascinated by fighter planes as a kid, especially the World War II stuff.”

He made model airplanes and, using cotton, hung them from the ceiling of his bedroom in Westown, New Plymouth.

On Skyhawk’s job, they performed all sorts of maneuvers, and Land called the other planes in for formation shots. “We did quite a lot in four days, including flying over the Southern Alps.”

The photo of the jet and maunga and another of his Skyhawk images are among more than 120 photojournalism images auctioned at the Plymouth Hotel on September 24 to raise funds for Hospice Taranaki.

The idea for the fundraiser came from veteran photojournalist Rob Tucker, who has terminal cancer and is in palliative care.