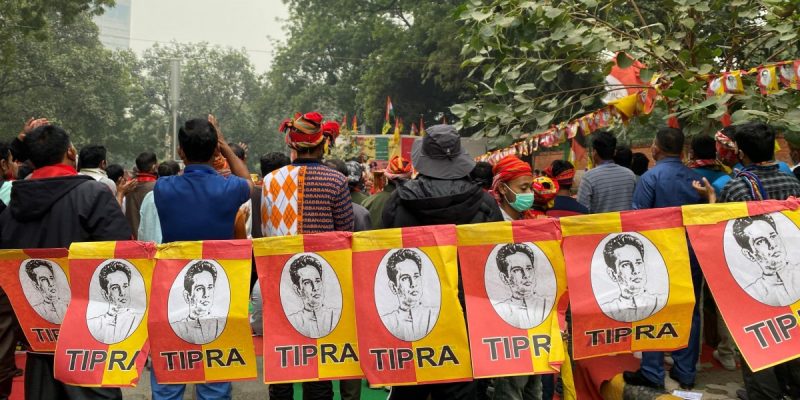 New Delhi: A crowd of over 1,500 supporters and members of two of Tripura’s regional parties – the Tripura Indigenous Peoples Front (IPFT) and the Tipraha Indigenous Progressive Regional Alliance (TIPRA) – have camped at Jantar Mantar in New Delhi since the 29th. November, brandishing slogans for the creation of “Grand Tipraland”.

Party leaders, who have the backing of no less than 55 civil society organizations in the northeastern state, raised the demand during a three-day mass sit-in in the nation’s capital, citing as the cause of the “question of survival” of the indigenous tribal population of Tripura, which borders Bangladesh.

The supporters of the IPFT with the request of Tipraland painted on their bodies. Photo: Sangeeta Barooah Pisharoty / The Wire

While the demand for “Tipraland” was raised earlier by IPFT, an ally of the ruling BJP government in the state, president of TIPRA and former king of the princely state of Tripura, Pradyot Manikya Debbarman leads the way. front by calling for a “Grand Tipraland”.

A supporter of “Grand Tipraland” hanging a map of the proposed state around his neck. Photo: Sangeeta Barooah Pisharoty / The Wire

While stating that these two demands are the same, Debbarman also referred to the inclusion of Tripuris residing outside the Tripura Tribal Areas Autonomous District Council (TTAADC) in the model. TTAADC is led by TIPRA, with Debbarman as chair.

When Thread visited the sit-in protest on the last day – December 1 – a large number of participants who had traveled from the border state were seen holding the flags of TIPRA and IPFT, as well as the national flag. The majority of the participants were women, mostly dressed in their traditional outfits and jewelry.

A participant searching for his photo among a row of images clicked by local photographers on the protest site that had been put up for sale. Photo: Sangeeta Barooah Pisharoty / The Wire

TIPRA has a considerable support base among female tribal voters. Debbarman had announced not only one year of maternity leave and one month with paid leave for TTAADC employees, but also paternity leave, a first in the North East.

Protesters raising their hands in support of the demand for a separate state. Photo: Sangeeta Barooah Pisharoty / The Wire

Talk to Thread, Debbarman, present in Jantar Mantar, said: â€œWe, all indigenous peoples, have decided to come forward for Thansa, the unity of all our tribal peoples for our betterment, by shedding our political identity and our personal interests. Not only IPFT, we are supported by 55 civil society organizations.

The long-standing demand of a separate state for Tiprasas hinged on the fact that the indigenous tribal community has now been reduced to around 30% of the state’s population, mainly due to the influx of non-tribal Bengali speakers across the border, during and after the score.

A young Tiprasa holding a sign during the three-day protest. Photo: Sangeeta Barooah Pisharoty / The Wire

When asked categorically whether the movement was against the state’s Bengali speakers, who are now in the majority, Debbarman said: â€œWe are not against any community. We also have people from the Bengali community who support us. People of all faiths are here. Also, since TIPRA came to power at TTAADC, there has been no violence in our neighborhoods. All the violence is visible outside, in Agartala.

Debbarman was referring to the recent violence in the state’s municipal elections, which was reportedly called by the ruling BJP against members and supporters of opposition parties. Highlighting the victory of TIPRA candidate Seba Kalai in these Ambassa polls, he said: â€œThis is the first time that a tribal person has won an urban seat in these elections.