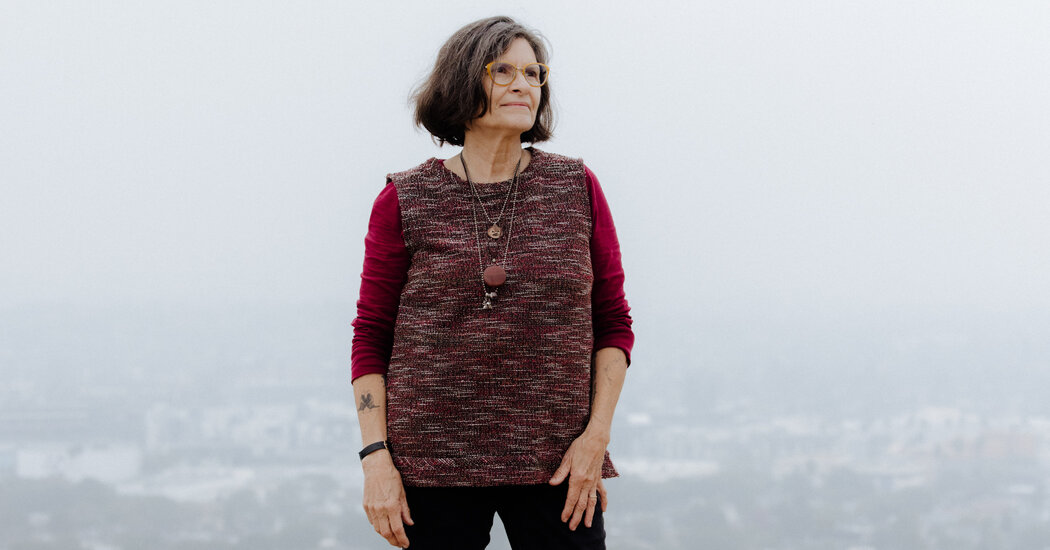 CULVER CITY – When Kim Abeles had a studio in downtown Los Angeles in the mid-1980s, she was delighted to one day see a deep bluish wedge appear between two buildings: a shard of the San Gabriel Mountains, which had been obscured for months through the city’s notoriously thick smog.

Abeles, a concept artist by training rooted in nature – she once lived in a grain elevator in Ohio – turned her astonishment into a project governed by her own rules. She set out to photograph this space from her studio fire escape every day until the mountain clearly reappeared. It took a full year and three weeks.

She quickly found other ways to approach the area. She decided to walk from her studio on September 10, 1987 towards the mountain “as the crow flies”, she said, until she could actually see it. She had to climb barbed wire fences and cross freeways on what turned out to be an arduous 10 hour, 16.5 mile pilgrimage.

She also experimented that year with a medium that ended up fueling some of her most important work over the past three decades. She cut a picture of the corner of the mountain from a vinyl sheet covering a plexiglass plate and placed it on the fire escape for a month to collect the particles. Indeed, the smog “sketched” the picture, creating both a recording of the pollution – she called herself a “skyline stenographer” – and something significant, if not beautiful, to be seen. from this one.

“How do you represent something like smog, which always feels like it’s in someone else’s neighborhood – how do you show something so elusive and hard to put your finger on? Abeles, who is 69, said from a clearing near the top of the Baldwin Hills Scenic Area in Culver City. With a grand view of Los Angeles stretching out in front of her, she sat on a bench next to her 10,000-pound sculpture of a manzanita seed, from her series called “Citizen Seeds”. The series was designed for the local trail system through a Los Angeles County Art Commission and incorporates the manual labor of community members. It was an unusually hot day in November, and it showed a faint line of pollution in the distance.

“It’s the same problem with the climate crisis more broadly,” she said. “We have to identify the problem before we can begin to see our collective or individual roles in solving it. “

His attempts to make the invisible visible, or the abstract tangible, can now be seen in “Kim Abeles: Smog Collectors, 1987-2020” at California State University, Fullerton, the most comprehensive presentation of his smog series. nowadays. Art historian Karen Moss, while noting that Abels has also done important work on AIDS / HIV and domestic violence, said she has been immersed in environmental issues for over 30 years – “before other artists get into what we now call eco-art.

Fullerton’s exhibit features little-known smog designs on paper, fabric, wood, glass and recycled plexiglass, starting with this quirky mountain corner, as well as her most famous series, US Presidents’ commemorative plaques she has made. made in 1992 by exposing each portrait to the weather for four to 40 days – its way of assessing each president’s environmental record.

The contrast between Jimmy Carter, whose face appears pale on the porcelain plate (left outside for 8 days), and Ronald Reagan, whose face is dark and smeared with particles (40 days), is particularly striking. As she noted, “Carter installed solar panels on the White House and Reagan took them down. “

While she is better known for her public and community art workshops than for performing in front of crowds of international artists, Abeles appeared on a 2019 show on the politics of environmental disasters at the Garage Museum in Moscow. She set out to make a new set of commemorative plaques, this time featuring world leaders from Emmanuel Macron to Vladimir Putin. But a Russian cleaner who was scared off by Putin’s dirty plate cleaned him of any environmental mischief.

Abeles did it again for the Moscow exhibit, and it now appears in its California survey alongside other commemorative plaques.

Fullerton’s exhibition also features two works from the pandemic era: “Smog Catcher,” a larger-than-life self-portrait made from particles in 2020, and images of lounge chairs on small wooden panels, titled “Deck Chairs on the Titanic,” made that year as Covid and the Bobcat Fire both raged. The Titanic’s work is clearly sharp, but her sense of humor and attention to materials – she used European beech wood, the same wood as the ship’s actual chairs – keep her from appearing too judgmental.

Sharing dark information about climate change without being didactic has become a specialty of the artist, who now lives in Pasadena, closer to the San Gabriel Mountains. “I love to map and collect data, but I don’t think that’s the real focus of my work – I think the works are prompts,” she said, describing how art can bring people together. people to think or to act.

Its oversized seeds, for example, are designed in different ways to connect people to the ground beneath their feet. “Do you need art on the trail to get people here? No, she said. “But I want you to walk further, or see more, next time.”

What restaurants are open on Christmas Day in Wilmington NC?

The week in Pune: catch a murderer, work with stage lights or get lost in pandemic…