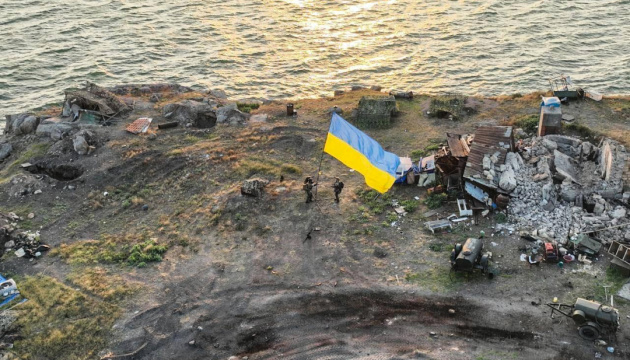 The Ukrainian flag installed on Snake Island bears the inscription calling on the Russian invaders to remember that this is the territory of Ukraine.

The flag bears the inscription “Main Intelligence Directorate of the Ministry of Defense of Ukraine. “Remember, ‘Russian warship’, Snake Island is Ukraine!” and the signature of the head of the Odessa regional military administration, Maksym Marchenko.

As reported, at the beginning of July, units of the Armed Forces of Ukraine completed a military operation to clear Snake Island of equipment and weapons of Russian invaders who had fled to temporarily occupied Crimea. The flag of Ukraine was delivered and installed on the island.

According to Forbes, the Russians lost nearly a billion dollars in equipment and weapons on Snake Island and the surrounding waters. The biggest loss of the occupying army was the flagship of the Black Sea Fleet – the missile cruiser Moskva – worth 750 million dollars. She took part in the capture of Snake Island, was hit by missiles on April 13 and sank the next day.