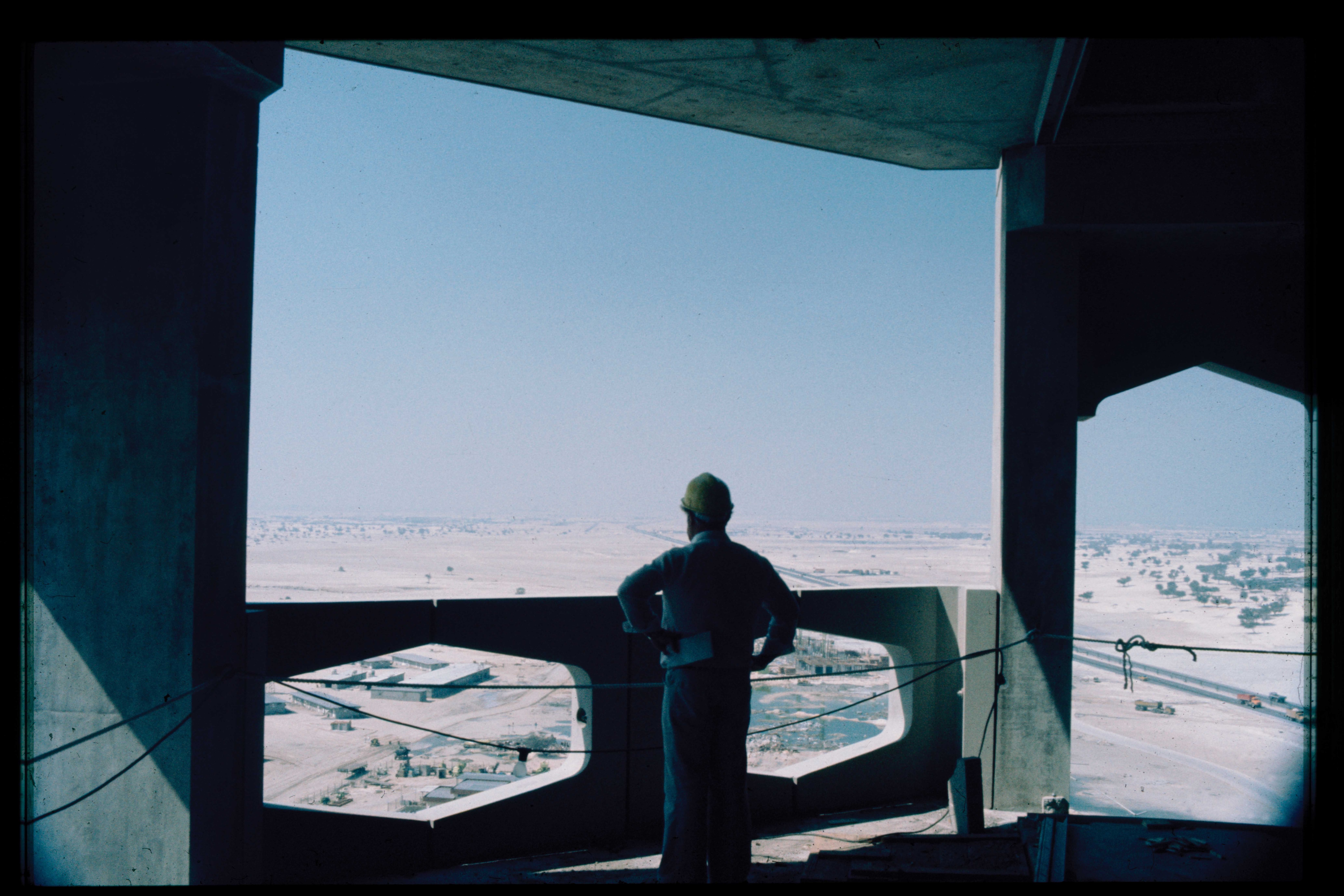 Hard hat, sleeves rolled up and arms akimbo, a construction consultant admires the view from an unfinished balcony at the Dubai World Trade Center.

Aside from a cluster of stocky warehouses and an older, slimmer version of Sheikh Zayed Road, there’s not much to see other than the desert. A pale ocher expanse speckled with vegetation and a clear horizon line.

It is 1977 and the photograph – one of the 58 rare images shown at the Jameel Arts Center – captures a pivotal moment in the development of Dubai; as the city took its first steps south, suggesting a new center away from the cove that served as the emirate’s economic backbone.

“We are not talking about a planning initiative, saying that the city would thus move south,” said Todd Reisz, curator of the exhibition Off Center / On Stage: Dubai Scenes from the 1970s, which opened its doors. doors Wednesday and will run through March.

â€œIn fact, you had planners until the 1970s who worked for the municipality to draw plans for the city to be centered around the creek,â€ Reisz says.. “But the market was different.”

The Dubai World Trade Center was designed by British architect John Harris under the auspices of Sheikh Rashid bin Saeed, then ruler of Dubai. And while the 184-meter tower isn’t the spearhead of a deliberate move to expand the city south, Dubai’s first skyscraper is looming as a marker of future development. It was, says Reisz, an exhibition in its own right.

“Known at the time as the International Trade and Exhibition Center, it was conceived as an exhibition space, it was also an exhibition in itself, a prototype of what the future would look like and work for. in Dubai “, we read in the introductory text of Off-center / On stage.

Over 40 years later, the Dubai World Trade Center has been eclipsed by the skyscrapers huddled along the edge of Sheikh Zayed Road. The city’s push to the south has also crossed much further than where the tower is located, with a myriad of bustling residential and commercial areas all the way to Dubai’s border with Abu Dhabi. As such, the city center has been too mercurial to locate since it left the banks of the s-curved creek.

The photographs in the exhibition are all taken between 1976 and 1979, a period when Reisz says that “the city was starting to move away from the center, which would have been the Dubai Creek”.

We’re at work @jameelartscentre, lighting up

Exciting to see the exhibition come to an end, but I don’t forget to savor the time spent with these great people. pic.twitter.com/XTQIETuRHL

This is what the title of the exhibition Off Center / On Stage refers to.

While the first half of the title hints at when Dubai began to expand away from the creek, the second is a nod to the city’s ability to expose itself to the world – a force that will be fully in effect at Expo 2020 Dubai.

â€œOn Stage is a bit of a reference to the Expo,â€ says Reisz. He notes that the photographs, newspaper clippings, official documents and town plans in Off Center / On Stage show how Dubai has been a city of exhibitions since at least the 1970s, “providing a portal to see another exhibition, a city â€‹â€‹as an exhibition “.

â€œThere is a historical thread that leads to the Expo,â€ he says.

Reisz stumbled across the photographs while working on his book Witness city: how the architecture made Dubai. While working on the Dubai World Trade Center project, architects Stephen Finch and Mark Harris took the photographs as visual notes for themselves and their colleagues. However, they had long been put away and forgotten until Reisz met the architects as part of the research for his book. Although there are several aerial photographs showing the tower during its construction, it is much more difficult to find photos taken from the point of view of the architects, looking at the tower.

â€œI suddenly had all these color photographs that helped me write the book, but couldn’t be included in it because the images in the book were all black and white,â€ he says.

But the architect and author did not want the photographs to risk fading into oblivion and decided to present them in an exhibition, contacting the Jameel Arts Center in 2019. The exhibition was originally scheduled to take place in 2020 before being postponed due to the Coronavirus pandemic.

Most of the photographs were taken on Kodachrome slides, believed to be the first film to use a subtractive color method, which uses pigments of cyan, yellow, magenta, and black to produce color using reflected light.

Mounted on discolored steel frames giving the impression of scaffolding, the photographs in the exhibition are all presented in light boxes that bring their colors and details to life.

“[Photographic] the slides are kind of a lost medium, â€he says. â€œIt was a pre-digital way of condensing a lot of information into a tiny space. Kodachrome slides have a particular color palette. Greens are charming and blues sometimes burst with an outrageous effect, which should be taken care of. “

There’s a charm that Off Center / On Stage takes place in the lobby of the Jameel Arts Center, with the retained waters of the creek flowing as a backdrop.

â€œIt’s my favorite piece at the Jameel Arts Center,â€ says Reisz. “How often do you have a view like this of the stream, don’t you?” He notes how the southerly waters offer a poetic motto when one thinks of the development of Dubai. “It is a spatial maneuver but also a chronological one because space and time have always moved south in Dubai.”