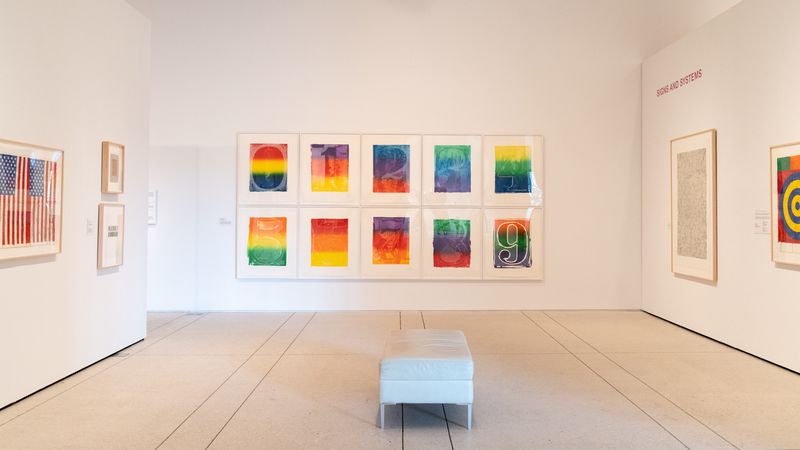 
TAMPA – Being 91 is something to celebrate but above all for a legendary living artist such as Jasper Johns, whose work is commemorated by an exhibition at the Tampa Museum of Art.

“An Art of Changes: Jasper Johns Prints, 1960-2018” is organized by the Walker Art Center in Minneapolis, which has the most comprehensive collection of Johns prints.

Johns is considered a pioneer in many printmaking techniques. His style can be difficult to define. He started working during the era of Abstract Expressionism after WWII, but he was reacting against it. His work focuses on everyday objects such as flags, numbers and maps which he slightly modifies, reinterprets and repeats.

He was a painter and sculptor but found printmaking to be an ideal process for exploring this notion of change by repeating patterns. Over the years, he has innovated many processes in screen printing, lithography and engraving.

In the 1950s, he traveled to New York, where he met Robert Rauschenberg, who would become his studio mate and romantic partner. He was a contemporary of composer John Cage and choreographer Merce Cunningham, with whom he collaborated.

In 1960, Johns made his first lithograph of a target, a motif he repeated throughout his career.

Johns is perhaps best known for his American flags. One of these works is on display in the Tampa Exhibition, in the first of four thematic sections, along with a series of colorful numbers and targets. Johns does not explain the meanings behind his works.

Another section of the exhibition focuses on her studio practice, and we see her vibrant color palette become more subdued. He represents objects from his workshop, as with Savarin from 1977, with a can of coffee full of paintbrushes.

Johns took a long time to fully reveal himself through his work, but he was interested in body parts, so many pieces include disembodied arms and legs. He never worked with live models; instead, he made plaster casts of body parts and worked from them.

From the mid-1970s to the early 1980s, two new patterns dominated Johns’ work: hatch patterns and irregularly shaped polygons. Johns said they were inspired by the speeding cars and false flagstone walls of New York City.

Johns has collaborated with artists in all disciplines. A book that Johns illustrated for author Samuel Beckett, Foirades / Fizzles, is included in the exhibition.

In the 1980s, Johns was thinking about personal themes and a figure began to emerge, as in his series “The Seasons”. In this one, many motifs from his early works, such as the American flag, are combined with the hatching and disembodied arms, but the outline of a figure is new. It changes placement and shade with the seasons. Some images are inspired by Pablo Picasso works, which appear on the exhibition label.

Another job, Between the clock and the bed, was inspired by Edvard Munch Self-portrait: Between the clock and the bed. This is a totally abstract interpretation made with the hatch pattern, making he a careful comparison with the original, which is illustrated on the label. During this period, Johns explored themes of life, death, birth, and aging.

With around one hundred prints, the exhibition is a solid illustration of Johns’ process of layering revised and repeated motifs, as well as the innovation and experimentation that make him a unique voice in art history. .

If you are going to