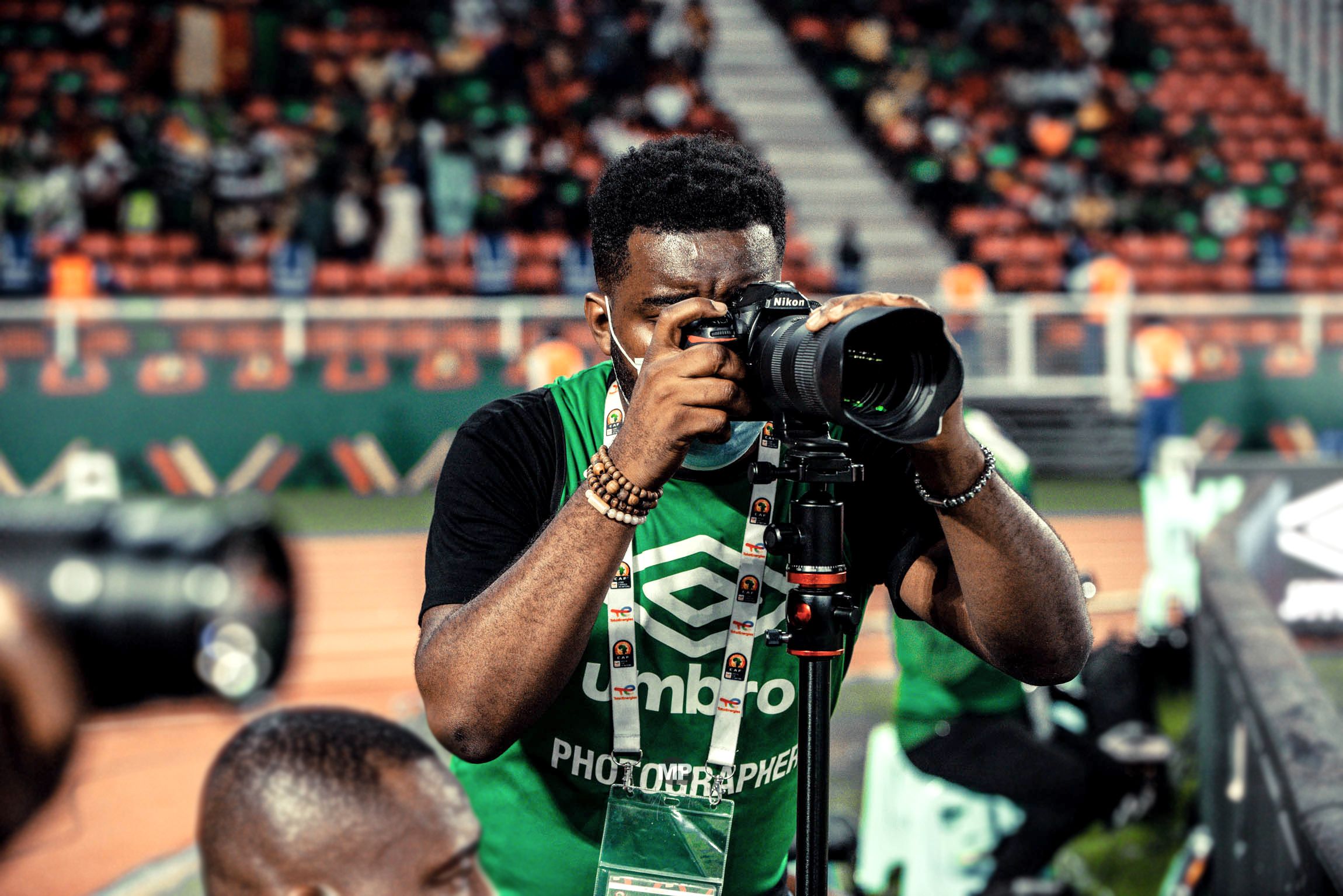 The Viral Photographer Afcon Cameroon Made

As the African Cup of Nations (Afcon) fiesta rages on in Cameroon, a young photographer is in a good position to make a name for himself. The time is coming but not his accreditation. And then ? The making of a viral photographer.

This article was contributed to TechCabal by Patrick Nelle/bird

The roar of the crowd takes the eardrums in the stadium to the point of bursting. Colorful and exuberant football fans filled the 60,000-seat arena and now they’re shouting, shouting, singing, dancing and having fun as legendary Congolese rumba hit-maker Fally Ipupa declaims a crowd pleaser.

The skies are bright above the Olembe stadium in Yaoundé, the capital of Cameroon, where the 33rd Africa Cup of Nations opens with a memorable and vibrant spectacle. Standing near the field, a young man watches. In a few minutes, he’ll be firing up his camera, producing some incredible shots that will go viral and elevate him to stardom. That’s the power of AFCON, Africa’s biggest regular football event.

Get the best African tech newsletters delivered to your inbox

The 28-year-old Cameroonian in the crowd is Didier Lefa, a wedding and events photographer who spent two years preparing for Cameroon’s Africa Cup of Nations to venture into sports and freelance photography. He upgraded his equipment with a new lens and other advanced equipment to ensure timely delivery of his photos. He is still puzzled as to how he ended up in the crowd and worried that he messed up a bit. He doesn’t have to worry. He is minutes away from being one of the most watched photographers on the continent.

Only a few hours before the start of the competition, Didier’s dream was about to collapse. After two years of preparation, a crucial element was missing

“I had not yet received my accreditation,” he explained. He had not yet obtained accreditation from CAF, the Confederation of African Football. The accreditation document gives journalists and photographers the right to access the stadiums and places where the AFCON takes place.

“Without that, I couldn’t do anything. I was totally discouraged. My morale was at rock bottom, all my efforts had been in vain,” he said in an interview.

If his aunt, who is a sports photographer, hadn’t woken him up in the early hours of that Sunday morning, he would have stayed home and watched the party on TV.

“Accreditation or not, be there,” she told him. He argued but ended up bowing to her harsh insistence.

He remembered wondering why she was taking him away so early in the morning. The opening ceremony was not scheduled to begin until 2:00 p.m. He would soon find out why.

“The gates to the stadium were still closed, but the place around it was already overcrowded, everyone was already in a good mood, the AFCON party had already started. Ten hours before the match kicked off, we had the feeling late,” he recalls.

He took his camera out of his bag and started filming. He and his aunt were the only photographers on site, and being there gave him renewed energy, Lefa said.

“I took photos frantically. I captured footage of football fans undergoing their covid-19 tests and getting vaccinated. I posted them on Twitter, and they went viral. Every photo I posted went viral, it was amazing.

Amid the excitement of his work going viral, Lefa was still worried about his accreditation. He still didn’t know if he could finally enter the stadium. Once again, her aunt came to her rescue.

“I don’t know how she managed to do that, she just said ‘don’t worry, follow me’, which I did, and I ended up inside the stadium. was a terrible expectation,” he said.

After more than 4 hours of non-stop filming, he was starting to feel tired, but being close to the pitch and just yards from the players gave him a boost of energy. He enthusiastically filmed cheering fans screaming in the stands, the action of the game and the prowess of the players on the pitch, releasing a stream of powerful and vivid images on social media, all going viral, one after another. .

And at 11 p.m., totally exhausted, someone called him on the phone. “Your accreditation is ready, come get it” said the voice.

Comments on his Twitter profile showed how his photos struck a chord with the public.

“There is real life in her photos, when I saw them I really felt like I was there in Olembe enjoying with the other fans,” Bernadette said, explaining why she is became one of Lefa’s more than 130,000 followers on Twitter.

“Our country is mired in crisis, and I think his photos keep hope alive and help us to believe that despite the crisis, we still have the potential to achieve great things,” added Onana, another Lefa fan. .

Lefa made photography her profession just 4 years ago, resisting the demands of her father who wanted to veto her career choice. His mother, however, defended her son’s decision and her determination eventually convinced his father as well. The family supported his passion and career direction as they funded a $2,000 professional camera.

It is this camera that today produces memorable images of one of the most important moments in his country’s modern history, capturing the raw emotion, life and beauty of a moment in time. .

His passion for photography came very early, he says, when he discovered photography through his aunt.

He remembers that one day his aunt took him to an orphanage for a photo report.

“She gave me a Nikon SLR, it was my very first experience with this kind of camera. She said “just take pictures”, which I did. That’s how it all started.”

Lefa believes that in Cameroon, photographers do not receive the social credit they deserve for their work. For example, he explained, many media organizations across Africa ‘steal’ images from the internet and use them without the permission of the owner and without respecting copyright principles.

He had exactly this problem with a local Cameroonian newspaper that took one of his Afcon images directly from Twitter to use for content illustration purposes, without citing him as the author. He denounced this decision on his Twitter feed, triggering an online mobilization against the media, leading the offending organization to apologize.

Lefa didn’t slow down after that first viral photo. Throughout the tournament, he traveled from city to city, passionately capturing the essence of every AFCON match. He accepted a bird interview during a short transit to Douala from Yaoundé, en route to Limbé where he was to cover the match between Ivory Coast and Algeria.

With a burning desire to take on new challenges, Lefa was already looking to the future. His current experience has enabled him to forge links with foreign photographers and to forge partnerships with certain media such as RTI, the Ivorian public channel.

His next “big thing” will be the FIFA World Cup next November in Qatar, he said.

Get the best African tech newsletters delivered to your inbox