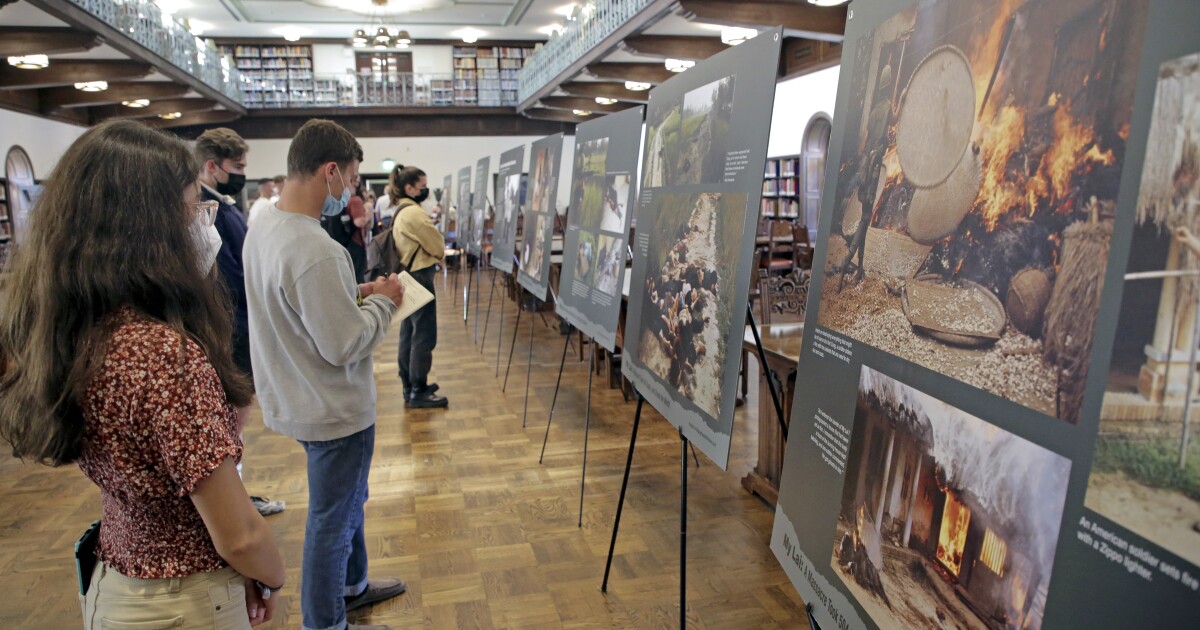 Half a century later, the photographs retain their shocking power.

Ron Haeberle understands this better than anyone. He took the photos, which documented the massacre of Vietnam War civilians in My Lai by US soldiers.

“War is war,” he said. “A lot of bad things happen in war. They are performing now, in Ukraine.

This story is for subscribers

We offer subscribers exclusive access to our best journalism.
Thank you for your support.

The juxtaposition of then and now is playing out at the University of San Diego, where a new exhibit of photos by Haeberle is causing thought among students, faculty and staff whose online news sites and social media feeds are awash these days with sometimes gruesome photos of Kyiv. and other bombed cities.

Haeberle, now 80, came to San Diego from his home near Cleveland for the exhibit’s opening on Wednesday and to answer questions from the university community about what he calls “my silent protest against the war”. (Due to COVID-19 restrictions, the exhibition, which runs until March 28, is not yet open to the public.)

“How people react to the photos, I’m always curious to see that,” Haeberle said in a phone interview with the Union-Tribune a few days before his arrival.

Curiosity is what brought him to Vietnam in the first place. After drafting into the military in 1966, he was sent to a public information office in Hawaii, where he worked as a photographer. His tour of duty coming to an end, he requested a transfer to Vietnam.

“I wanted to see what was going on,” he said.

On March 16, 1968, he arrived in My Lai by helicopter with Charlie Company, 1st Battalion, 20th Infantry Regiment. He’d been posted to the 100-person unit that morning, so he didn’t know the soldiers — didn’t know they were bristling with revenge after earlier firefights that had killed some of their colleagues.

They had been told that Viet Cong troops were hiding in the village – which was not true, as it turned out – and that any civilians there were enemy sympathizers. Within minutes, the shooting began.

For several hours, the soldiers killed hundreds of men, women and children. They raped some of the women, according to a later investigation, and mutilated some of the bodies. They set fire to the village.

For Haeberle, stunned by what he saw, a kind of reflex was triggered. He lifted his camera and started pressing the shutter button.

He had two cameras with him that day. One was an army-issued Leica he used to take black-and-white photos of individual soldiers in action. These photos were reviewed by military censors before being released to the soldiers’ hometown newspapers for publication.

The other camera was his, a Nikon that contained color film. He had taken photos of the sites around Vietnam for his personal photo albums. Now he’s used it to document the carnage. Dead villagers on the road. A body thrown into a well. Terrified women and children huddled together moments before they were shot.

“I was there to take pictures, so that’s what I did,” he said. “I knew what I was seeing wasn’t right.”

His tour of duty ended a few days later, and then he left the army. He took the Nikon home to Cleveland. Weeks passed before he could watch what was on the film.

Haeberle had no intention of publishing the photos. He thought the superiors knew what had happened at My Lai; officers flew overhead as it unfolded. The chips would surely fall.

Nothing happened. Haeberle put together a slide show for civic organizations interested in Vietnam. He included some photos of My Lai at the end. The reaction, he said, was always the same.

“People couldn’t believe American soldiers would do something like this,” he said.

By the summer of 1969, news of the massacre was swirling in Washington, DC, and elsewhere. An Army investigator questioned Haeberle and told him that his camera captured only part of the atrocities. Haeberle decided it might be time to inform the public.

He went to his hometown newspaper, the Cleveland Plain Dealer, and showed the photos to the editors. Seymour Hersh, an investigative journalist, had written a story about My Lai which was beginning to appear in newspapers nationwide. The Plain Dealer packaged Hersh’s story with eight of Haeberle’s photos (printed in black and white) and published them on November 20, 1969.

A month later, Life magazine printed the photos, this time in color.

“That’s where most Americans first met them,” said Kathryn Statler, a USD history professor who teaches courses on the Vietnam War, “and they created a huge wave of public reaction.”

The first response, she said, was “the photos can’t be real.” The second: “What are we doing over there? Anti-war protesters had been active for some time, but now mainstream Americans have begun to question the validity of US military involvement.

Haeberle was praised by some for his courage and criticized by others for not coming forward sooner. Once the fury passed, he went on with his life. He had considered a career in photography, but settled into manufacturing instead, where he worked as a supervisor.

He thought the interest in the photos would fade over time. Instead, nearly every new war eventually invites comparison to My Lai. “The sad truth is that atrocities do happen,” he said. “And the civilians are the ones who suffer.”

He returned several times to Vietnam and met survivors of the massacre. One of them was the son of a woman killed that day. Haeberle took a photo of her body on the floor.

The son had a family sanctuary in his home. It expanded to include something Haeberle gave him: the Nikon used to document what happened at My Lai all those years ago.

The USD exhibit was curated by long-time social and labor justice activist Ron Carver as part of a project he started called Waging Peace in Vietnam. It highlights the actions of American military personnel and veterans who have openly questioned the war.

Carver first contacted Haeberle for a book published in 2019. It includes first-hand accounts, historical posters, underground newspaper clippings, essays by scholars, and poems by veterans. Next, Carver came up with the current exhibit, “My Lai: A Massacre That Took 504 Souls, And Shook the World.”

It includes, for the first time in the world, the 19 photos taken by Haeberle. There is also a sign about his decision to show the photos to the Plain Dealer. Another panel features an Army helicopter crew – Hugh Thompson, Glenn Andreotta and Larry Colburn – who landed several times during the massacre and led groups of civilians to safety.

“I think it’s important to show both sides,” Carver said. “Not just the horrors of war, but also the people who, at the risk of their lives, stood up and spoke about what they had seen.”

A companion exhibit, also called “Waging Peace in Vietnam,” is on view through March 28 at San Diego State University in the library’s Donor Hall. The exhibition is open to the public with proof of COVID-19 vaccination or a negative test.