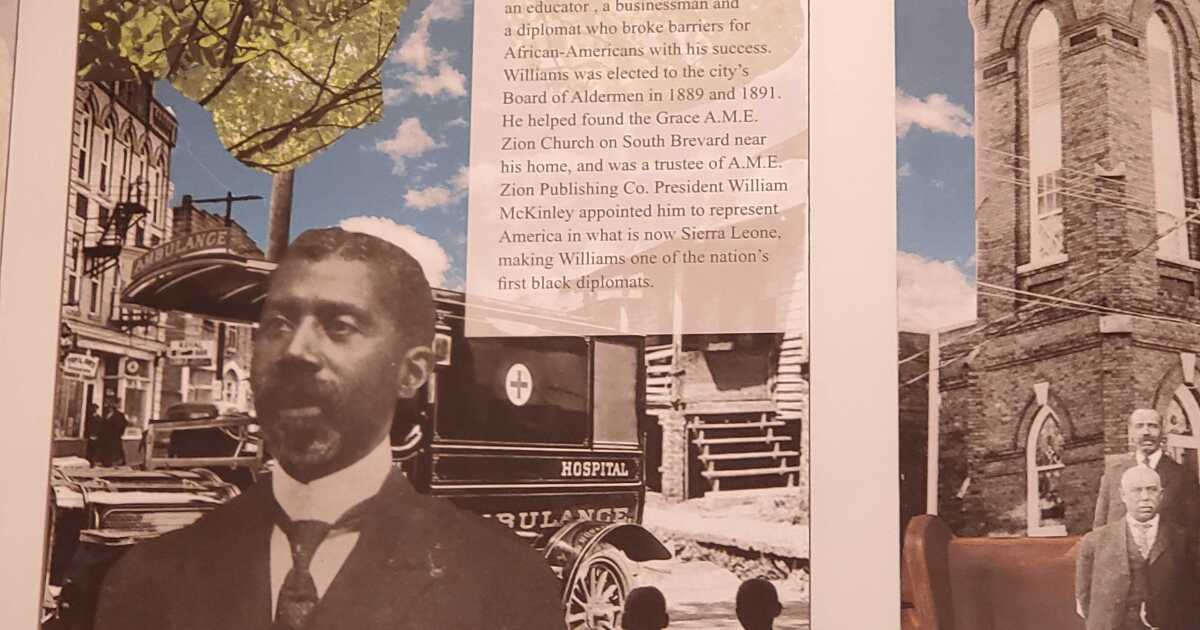 A building that was once the heart of Charlotte’s black business community is reborn as the Brooklyn Collective, where small businesses, nonprofits and local artists come together to serve the community.

Jason Wolf was unaware of the rich history of the three buildings he purchased six years ago when looking to invest in a commercial property.

He loved the vibe of old churches and heard about the last remaining buildings of the old Brooklyn neighborhood.

Brooklyn was located in the Downtown Second Ward and was a black community due to segregation. Brooklyn had its own schools, library, churches, and a thriving business district. In the 1960s, the neighborhood was destroyed as part of Charlotte’s first wave of urban renewal. About 1,000 families were displaced from their homes and nearly 1,500 buildings were eventually razed.

Only a few of these original buildings remain.

Wolf ended up buying the Grace AME Zion Church at South Brevard and Third streets. He also bought the two buildings next to the church, including the Mecklenburg Investment Company, or MiCo for short.

It was the first office building open to black professionals in Charlotte and was funded by that community. One floor of the building was used as a meeting place for black civic groups. MiCo has helped support entrepreneurs and small businesses also by providing training.

After purchasing the property, Wolf researched the building’s founders extensively, architect William W. Smith, who designed the MiCo building; and business and civic leaders JT Williams, Thaddeus Tate and Caeser Blake. Wolf wanted to continue their legacy as best he could, but he didn’t know where to start.

Monique Douglas and her husband, Kevin Douglas, who were looking to rent space in Wolf, came up with the idea for a business incubator. The three proposed a plan to help grow small businesses, nonprofits and artists to support upward mobility and equity in the Charlotte area.

Nearly 100 years after first opening its doors, MiCo – along with Grace AME Zion Church and Studio 229 on Brevard – is reborn as the Brooklyn Collective.

The Douglases are co-owners of Studio 229 On Brevard, the collective’s event center. Together they lead the Brooklyn Collective. Monique focuses on community engagement and awareness. Kevin also gives photography lessons to underserved youth.

The Douglases opened their business in January 2020, six weeks before COVID-19-related business and crowd restrictions began in North Carolina.

“It was during another pandemic, the flu pandemic in 1918, that the founders of the Brooklyn Collective) began work on this building,” said Monique Douglas. “And during a pandemic, they were here trying to get the funding and the support that they needed for the community to get this project built.

Douglas described the experience of starting a business at the start of the pandemic as a roller coaster, but said despite it all, they are still thriving and doing the work that needs to be done for the community.

Currently, nine tenants are part of the Brooklyn Collective.

“We invited tenants who share the same vision and mission as us,” Douglas said. “And that aligns with our goals here at Brooklyn Collective.”

“Our mission here is to be a gathering place for real conversations, not only to make a real difference to our community, but also to be a place of education and empowerment,” Douglas said.

The business incubator has different types of small businesses and non-profit organizations. This includes Advocations, which aims to place people with disabilities into employment opportunities, Roddie Jr.’s Watchdog Foundation, a non-profit organization working to reduce dog-related injuries, and The FACTS Initiative. , which provides counseling services to families and couples. .

Fashion designer and embroiderer Gordon Holliday is also part of the collective. The first African samurai, Yasuke, who lived in the 16th century, inspires his latest fashion collection. He creates kimonos with detailed patchwork and uses recycled materials in his clothes.

“When I started thinking about what he would wear in a modern sense since, in my brain, I saw a really cool cross-cultural reference of an African warrior in a Japanese environment,” Holliday said. “That really resonated with me. I was like, ‘How many times have I been the only black kid in the room?’

Holliday was also inspired by the sashiko and boro sewing techniques used in Japan to patch and mend clothes.

“It wasn’t that easy to redo another piece of clothing,” Holliday said. “So what they would typically do is patch their clothes, having the same thing for years and years in character.”

Douglas said business incubators allow artists, entrepreneurs like Holliday and small businesses to thrive because each tenant supports each other and gains visibility.

“People in the early 1900s really knew what they were doing,” Douglas said. “I’ve talked to a number of people who grew up in Brooklyn, and they were like, ‘Oh, I know that building! My mother used to bring me here for my dental work. Or, “My parents’ lawyer was here.”

February 18 was a big day for the collective as the MiCo building turned 100 years old. To celebrate, the Brooklyn Collective has opened a new art exhibit called “Still Standing,” where established black artists showcase their art. The last day of the exhibition is May 20.

You can also expect the Brooklyn Collective’s Black Fine Art Fair from March 25-27.

To learn more about the businesses of the Brooklyn Collective and upcoming events, visit brooklyncollectiveclt.org.

Cornell researchers have taught a robot to take Airbnb photos