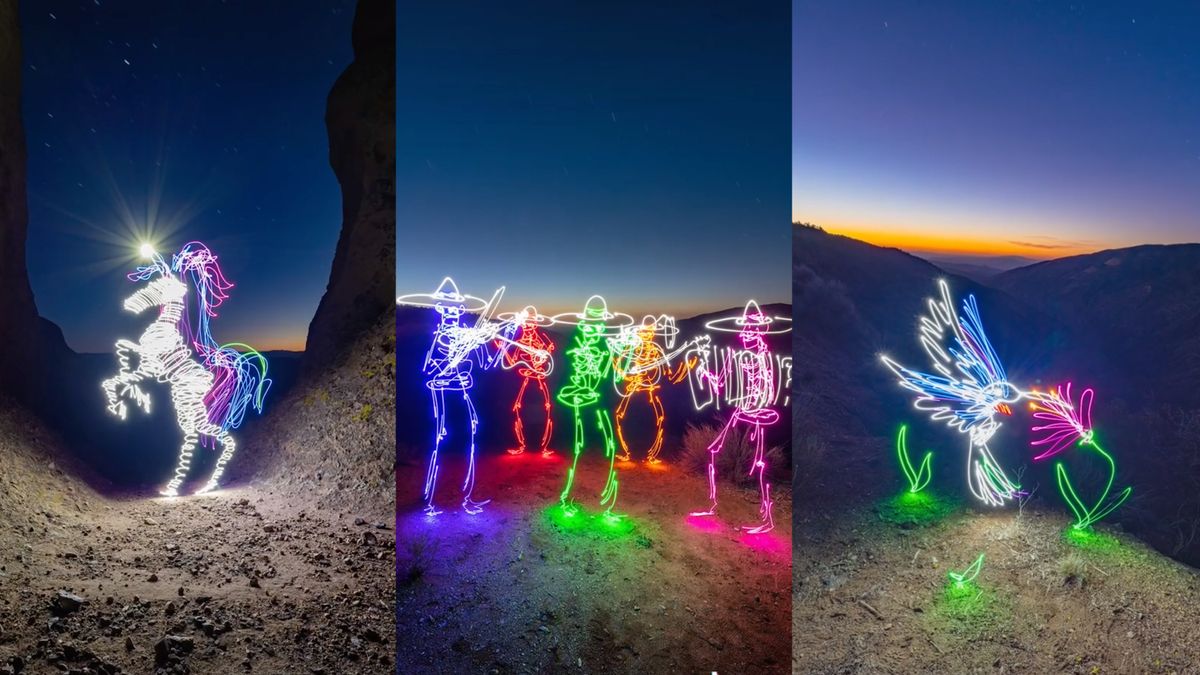 A few months ago we interviewed the amazing Darren Pearson aka Dariustwin – a photographer, light painter and animator based in Southern California, USA. He made a name for himself with a series of incredibly time-consuming stop-motion animations where he draws in the air using light.

A video can take months and months to record, as Darren has to plan shoots around weather and moon phases, as well as scout locations and script his ideas. For someone who isn’t particularly good at drawing, even on paper, I’m amazed that Darren is able to create such detailed drawings, in the air, without even being able to see what he’s doing.

It’s no surprise that on Instagram and TikTok, Darius has gained huge following, and rightly so. This is the first time I’ve come across light painting stop animations and clearly I’m not the only one who finds it inspiring. He now has over 185,000 followers on Instagram and amassed 4.9 million likes on TikTok, where he regularly shares process videos alongside final pieces.

Along with working on self-directed series and shorts, Darren recently started asking people in the comments what he should draw next. Responses so far have included everything from Pikachu and Kermit the Frog to a group of mariachi skeletons, a hummingbird, and even an octopus.

Every time I see a video he posts, I’m like, “Surely there’s no way he can paint this in the light,” and every time I’m wrong. In amazing animation, he even incorporates a person in the light painting that moves with the animation, transforming from an angel to a devil.

To create these breathtaking works of art, Darren uses a Sony A7R III, a tripod and a light painting tool he invented called Night Writer. It comes with a range of colored tips that you can use to create your masterpieces in all the colors of the rainbow. Darren has honed this craft over the past decade, so don’t expect to be this good right away, but you might be surprised at what you come up with.

People’s creativity never ceases to amaze me and Darren’s art shows that a little patience goes a long way. From the shorts he posts on YouTube to the behind-the-scenes clips he posts on TikTok and Instagram, it goes without saying that I’m hooked and I’m sure you will be too.

@darius_twin ♬ Getting Down – The King Khan & BBQ Show