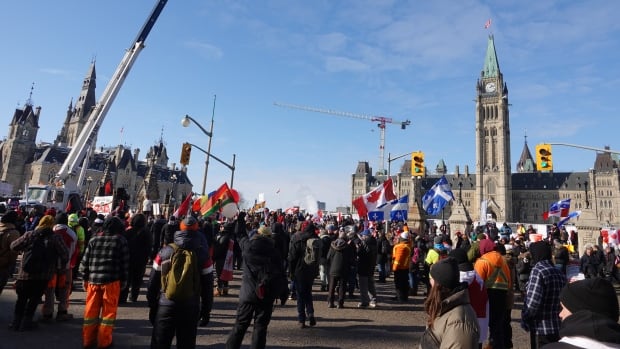 Adam Scotti is accused online of photographing a protester carrying a Confederate flag during the protest in order to smear the protest as a whole.

The Prime Minister’s Office says the allegations are false and that Scotti did not attend the protest.

“It is unfortunate that the Prime Minister is sending his personal photographer to misrepresent thousands of hard-working, law-abiding Canadian truckers and the millions of people across the country who support them,” MP Cathay Wagantall wrote in a Facebook post. which has since been deleted.

Wagantall did not respond to a question from CBC News regarding the deleted post.

Scotti said he hadn’t even attended the protests, which have now been going on for four straight days around Parliament Hill in downtown Ottawa.

“I didn’t leave the house, and yet they still came for me. How was your weekend ? he wrote on Twitter.

Scotti also shared a comment posted on his Instagram page by a stranger citing the example of Heinrich Hoffmann, Adolf Hitler’s personal photographer.

“Being compared to a Nazi photographer really starts your Monday off right,” Scotti added on Twitter.

I didn’t leave the house, and yet they still came for me. How was your week end? #Ottawa pic.twitter.com/qZAN1kdxt8

Those who accuse Scotti on social media use as evidence an image of a photographer taking a picture of a person carrying a Confederate flag. The photographer is said to look like Scotti, although the man’s face is almost entirely hidden by his camera and a trapper’s hat.

Another Conservative MP warned last week that the Trudeau government would try to smear the protest.

The protest convoy was initially billed by its organizers as a demonstration against the federal government’s vaccination mandate for cross-border truckers. But protesters in Ottawa have expressed much broader grievances against the Liberal government and public health measures.

Trudeau on Monday called elements of the protest “hateful.” The presence of swastikas and Confederate flags and the desecration of monuments – including the Tomb of the Unknown Soldier and a statue of Terry Fox – have been widely condemned.

Ottawa police estimated that around 8,000 people took part in the protests each day.