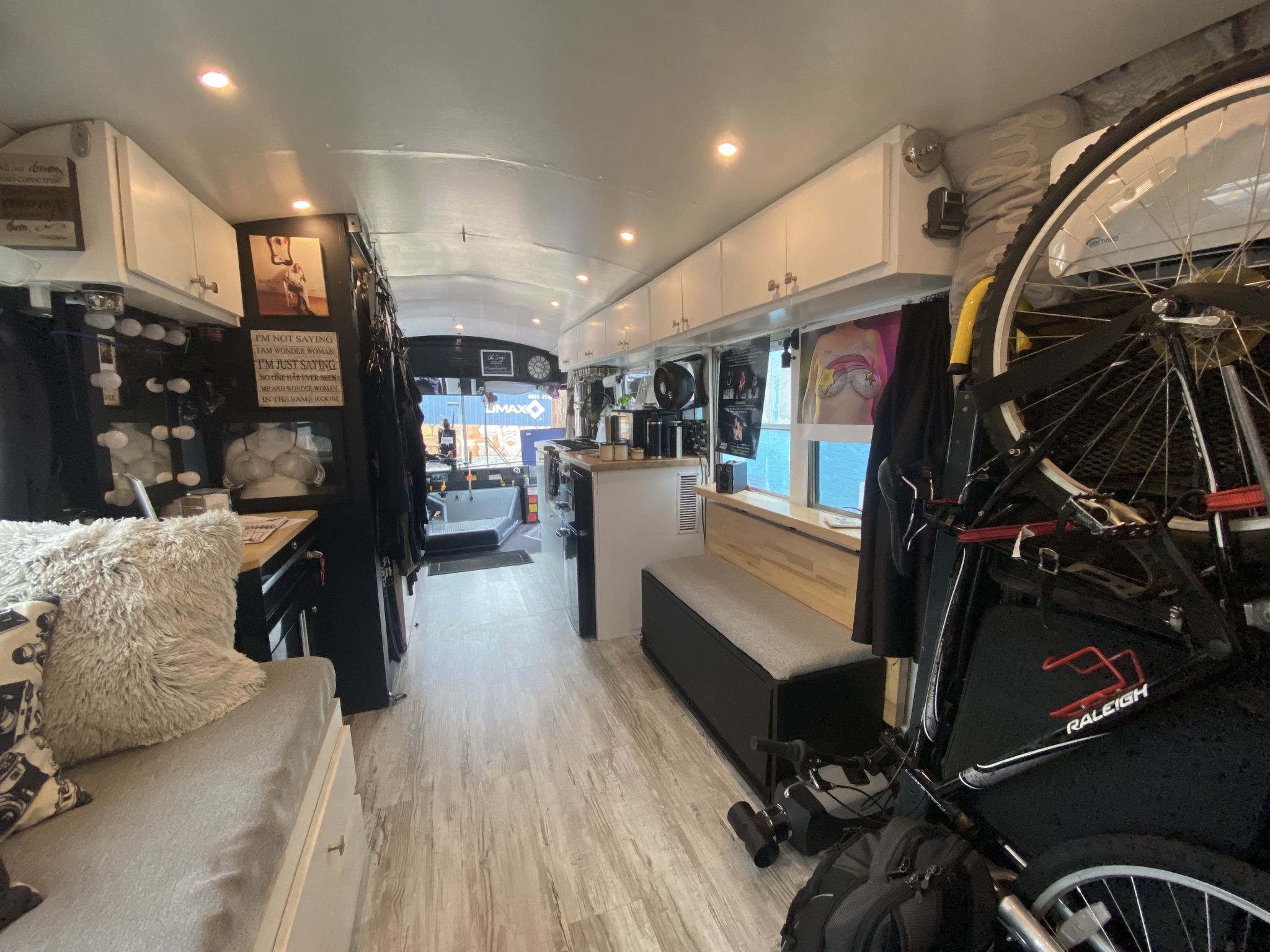 In the case of Annette McNamara, the wheels of the bus are turning in circles, across the country. The 41-year-old Nashville-based photographer is touring the country spreading her message of self-love and empowerment. She recently stopped in San Antonio on a chilly Thursday morning when half the city was shut down due to freezing weather, but McNamara’s bright pink bus radiated warmth and positivity through the Lone Star neighborhood.

She met us in Atticus, the 21-year-old Thomas school bus named after Kill a mockingbird central character Atticus Finch. The founder/driver/photographer spent around $45,000 to convert the bus into a home that doubles as a wheelchair-accessible photography studio. The nomadic designer uses the mobile studio to document the stories of strangers who become friends along the way as part of her Beautiful Strength photographic project.

Those willing to dedicate their time (and their pearly whites) to the project stop for a photo at one of McNamara’s pop-ups. The photographer takes a photo and does very little editing by mail. Guests are then given an iPad displaying their portrait with a stylus to scribble down notes, quotes or any other tips or reminders around their shot.

McNamara’s project began in 2018 and the series of bus bases launched in April 2021. Since then, she has taken around 600 photos and estimates that a thousand more will be taken this year. She eventually wants to hit every state (although Atticus can’t make it to Hawaii) and open a gallery featuring all the portraits and stories of people she’s met along the way.

The photographer says she had no idea how to drive a bus when she started (her everyday car is a Ford Focus) but she tried. Less than a year later, she’s been traveling across the United States, taking daunting routes through the Pacific Northwest and the Cascade and Rocky mountain ranges.

“It’s a challenge every day, but it’s also worth it and in the worst case, I die,” she says. “It would suck, but at least I would die doing something I love.”

Although Atticus has a bold pink exterior, McNamara’s bus interior design is neutral and minimalist. The sunny interior of the bus isn’t entirely empty – there’s plenty of inspiration in the form of uplifting quotes, photos and personal knick-knacks – but it does offer something of a blank canvas.

Atticus is also remarkably well groomed. “Or is it all in your business? I asked McNamara, who started opening drawers and shelves, revealing her capsule wardrobe, beauty corner, kitchen appliances, desk accessories, photography gear and crafting supplies. candles (his other hobby). The daybed lining the wall was where McNamara sleeps, but no. The matte black wall at the back of his bus that serves as the backdrop to his studio folds under to reveal a queen-size bed. With the hidden bed, daybed and hammock hooks hanging from the roof, the bus can accommodate a total of seven people.

Although few people stayed overnight, McNamara estimates that at least 5,000 people walked through the doors of Atticus to share their stories of perseverance. She says San Antonio is probably the “friendliest” city she’s visited on her national tour. During her week-long stop in the town of Alamo, the photographer visited the usual must-sees like the Alamo and River Walk, but also strolled through the missions, a church, and the Northside.

“I’ve done a lot in this area, but I will say it’s very diverse and it seems like a nice melting pot of culture and kindness and everyone gets along,” she adds.

McNamara says launching her post-pandemic photo series of 2020 was the perfect opportunity. After meeting thousands of people, she feels that communities around the world yearn to share their stories. As difficult and painful as the pandemic has been, she says it has forced everyone to reflect and perhaps reveal a layer of vulnerability.

“Everyone has resilience, whether it’s childhood trauma, a bad relationship, being the first in your family to graduate from college,” says the artist. “Everyone’s story has a purpose. Everyone has a chance to be seen, heard, valued and loved.”

Ms. Marvel Set Photos Confirm Reshoots Are On The Way