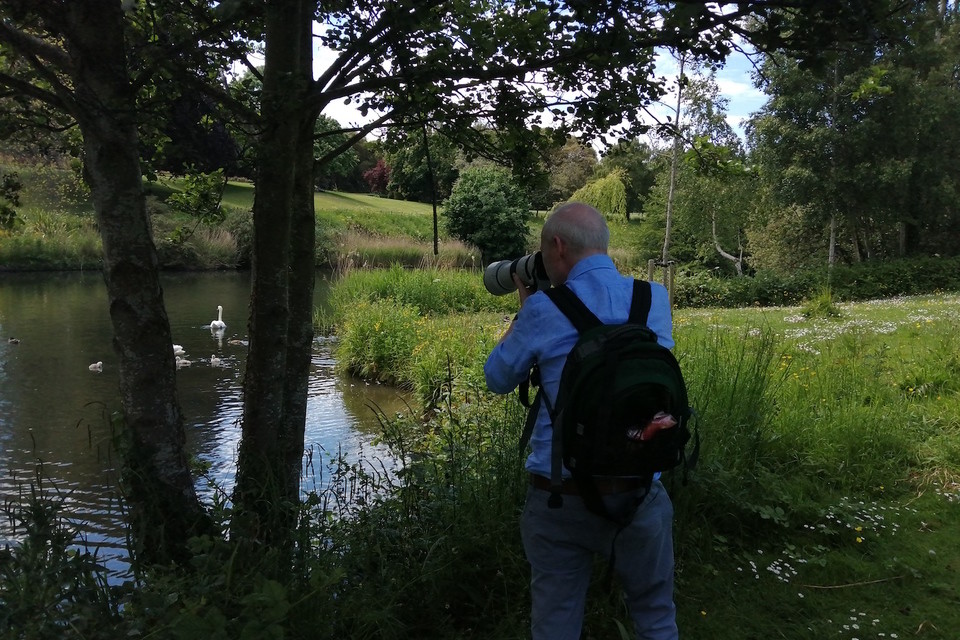 From his office window at Crumlin Children’s Hospital, Robert Keogh can see seagulls nesting on the roof of the building opposite and feeding their young.

A few weeks ago, he hijacked access to the maintenance aisle so he could climb up to the roof, he says.

“You don’t want to get too close to them,” he said. “Seagulls can become very protective and cause you to lose your mind.”

Keogh works in hospital purchasing. But he does double duty as a photographer and, once up high, he zooms in and captures the youth of one of Dublin’s least beloved birds.

Baby seagulls have tan fur that is a bit spiky with spikes and brown speckled heads with large black eyes. Their webbed feet seem too big for their body.

“They grow up to be terrorists,” Keogh laughs, “but they’re adorable when they’re babies.”

Keogh specializes in capturing wildlife and sees no reason to go to the countryside to do so, he says.

In Dublin, he took pictures of a cormorant coming down the Dodder River on a piece of wood.

He captured a fox eyeing a heron and a fierce-looking wild goat with large antlers standing on the rocks of Dalkey Island.

There is something satisfying about wildlife photography, he says. Some days you might find yourself with nothing, but there is an element of luck, and with that, adventure.

“When you get this image of the kingfisher coming out of the water with the fish, you come home feeling like you’ve nailed it,” he says.

The river flowed lightly alongside the Dodder at Rathfarnham on Monday.

It’s one of Keogh’s favorite places in town for wildlife, he says, as he walks along the shore.

The opposite bank is thick with tall green trees, singing and chirping.

This place is popular with kingfishers because the water is so clean and they are picky eaters, Keogh explains.

He shows the weir, where he smashed the cormorant as he landed on the piece of wood and surfed along the river.

Keogh crouched down to snap some photos of a shiny coated vixen as she lounged by the river. This one has had babies recently, he says.

He had spotted her when she was pregnant.

He gets up and takes more photos. Another fox arrives. The partner, Keogh says.

Other people stop to watch. Usually foxes are shy, but because of the wide river they don’t mind people-watching, Keogh says. “They are so laid back.”

The tod fox is installed behind a few rushes. He scratched his body several times, his coat torn.

He has mange, Keogh says, but people have tried giving him dog biscuits with antibiotics. “He’s prettier than he used to be,” he said.

But he joined the Dublin Camera Club about 15 years ago, he says. The weekly competitions suited his competitive nature.

“Every week you would like to win,” Keogh says. “Your photos have been judged and some of them have been decimated.”

It motivated him to want to do better. Soon he won portrait competitions and started working in the studio, he says.

He didn’t need any formal training and he always noticed things like shadows, he says. “It’s like an art form, you either see it or you don’t see it.”

A few years ago he got a good zoom that “kind of led me to the wildlife,” he says.

There is a sense of camaraderie among wildlife photographers, he says. They tip each other.

If another photographer saw the kingfisher and knew he had gone in the wrong direction, he would text him, he said.

The city of Dublin is teeming with wildlife, he says, but often people don’t notice it until it stops and starts snapping.

He often visits Phoenix Park and the Clontarf waterfront – and the Phibsborough Canal, where he lives.

The channel has improved since the Covid-19. “The cormorant moving into the old bakery, I’ve never seen it before,” he says.

Back on the banks of the Dodder in Rathfarnham, Keogh jumps over a wall and battles tall ferns and weeds.

Across the river, he sees a duck standing on a stone, in the shade of the trees. The river is calm and its reflection is almost complete.

The dark background provides a great photo opportunity, making the subject stand out. Even better, it’s full sun behind, he says.

He once took a photo of a heron flying along the canal, and the sunlight behind him bleached the background.

It completely exploded because it was overexposed, he says. “So it looks like a painting, almost, because the heron is crisp and sharp and the only other thing in focus is the reflection of the reeds. “

“It’s hard to convince people it’s not photoshoped,” he laughs, standing by the river.

He never improves any of his pictures of wild animals because he participates in international competitions, which have strict rules against it.

“They often ask you for the raw file to show it’s genuine,” he says.

The birth of a swan

Later that same day, in the People’s Flower Gardens in Phoenix Park, near the entrance to the North Ring Road, Keogh takes some photos of a family of swans.

Among them, swimming in the pond, are three fluffy gray swans.

He recently took a great photo of one of the babies when he captured it still wet coming out of the egg.

Looks like a family photo. Maybe the mother is introducing the new cygnet to her siblings for the first time.

Keogh worked for this photo. He knew the swans had to hatch, so he checked in every day after work, he says.

Persistence often pays off, but often getting a good photo is luck, Keogh says, as he stands up and gazes at the swans.

His favorite is the one he caught in the channel of a cormorant catching a perch, he says.

It was pure fluke and an image he couldn’t recreate, he said.

“It all came together in terms of light,” he says. “It was early in the morning, the sun was rising and it was backlit it – and light up the perch.”